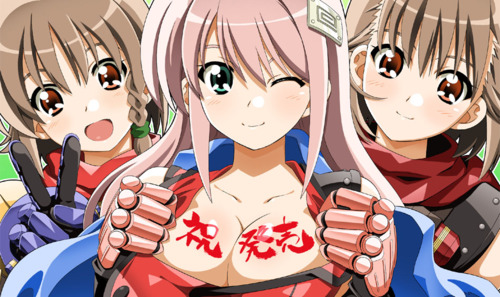 In a week where illness knocked out the man with the MangaGamer plan, our fearless leader Bamboo delayed his second livechat for a day. As Kouryuu and Evospace took their places to translate with a boost from Shini and livetweets from Agi, would they be able to face the otaku hoards? Find out after the cut.

First and foremost, Bamboo appeared in his Panty and Stocking T-shirt and greeted everybody with a reminder that he’ll be at Anime Expo next week and professed his desire to meet as many of the fans as possible. He also apologised for not replying to comments on the forums lately due to the upcoming Japanese release of OVERDRIVE’s new game, Dengeki Stryker.

Speaking of Dengeki Stryker, the first question was whether or not the title would have a Western release, and Bamboo confirmed it to the world: MangaGamer will indeed be selling the English language edition, “so please look forward to it!” He also reminded everybody that Evangelion‘s Megumi Ogata (the voice behind Shinji Ikari) has a role in the game, and demanded everybody show her some respect! When asked if this meant questions about Kamen Rider were now fair game, the reply was: “I dunno much about Kamen Rider but if its something i can answer. lol”, proving once again that our boss has a good sense of humour.

Bamboo then moved on to Go! Go! Nippon!, confirming that the game won’t be available for AX but hopefully (“We’ll try to [finish] this game”) for Otakon and that it’s for everyone overseas. Describing the game, Bamboo extended a friendly hand, “For those who have difficulty coming to Japan, we made this game to kind of experience what it’s like here.” He also confirmed that the core game is complete and hopes to demonstrate it soon. Being a guidebook, the gameplay is short, and the estimated runtime will be confirmed once Bamboo has a chance to play it through all the way. Likewise, in making an iOS edition, “[Apple are strict about] iphone applications so even if its a bit erotic, it gets rejected.” The possibility of creating DLC patches with additional locations to explore such as Nakano Broadway was also discussed, and it was reiterated that the core game is going to be very cheap to buy.

Returning briefly to AX, Bamboo reminded everybody of our panel on Sunday, 3 July at 10:30PM PDT in LP2 (LACC502)  and that he’d be taking Q&A with Tororo-dancho from Circus as well as providing updates from the Japanese side of the industry. Bamboo also shared an anecdote: “I was happy to see a fan who said he liked Kira Kira when I was about to get into a Taxi at AX last year.”

In terms of our upcoming visitors, and what it means for licensing: “There’s a possibility that companies like Clochette will release games with us, but we mostly take guest companies to AX to show them what the American market is like…It’s like a future investment to show them around and get them interested.”

On the subject of overseas events, Bamboo confirmed that OVERDRIVE visited Japan Expo in Paris a few years ago, but because France isn’t exactly what you’d call an English speaking environment, he’s iffy about going back. For now, his core focus is on the American market (plus he loves visiting the US.)

One viewer commented on Bamboo’s guitar collection, asking about his musical interests and talents, to which he humbly replied “I’m *** at playing the guitar and singing… orz”.

The topic then shifted towards the ongoing recovery from the March earthquakes, and Bamboo stated that it had a direct affect on everybody in Japan, hence the slower turnaround of some of our recent games. He also pointed out that game sales in Japan have fallen as a result as well: “It’ll probably take a while for us to fully recover from the quake. I went to Sendai last weekend and it was horrible. I’ve never been to a war zone, but it must be like this… It’s as if a typhoon hit your house.”

Bamboo then was asked about Tokyo Governor Ishihara’s recent comments and Bill 156 and its impact on OVERDRIVE and MangaGamer’s releases, but he pointed out that for foreign releases, they aren’t particularly relevant.

Speaking of cute girls, our very own Comko entered the conversation as a viewer asked about the possibility of seeing her in games. While there’s nothing planned for her beyond appearing on our website at the moment, Bamboo did get a laugh out of seeing her naked on 4chan.

In terms of the Japanese industry creating games with internationalisation in mind: “There’s a cost and language barrier for japanese developers to start thinking about overseas, and things are hectic at the moment within Japan. There are some developers who are interested, but it all depends on the demand and what they consider a success in terms of overseas sales. We need to make a good case to do business for that if we want  to succeed in such circumstances.” He did confirm, however, that OVERDRIVE had non-Japanese audiences in mind when making Go! Go! Nippon! and Dengeki Stryker. Bamboo also professed a desire to study English, and asked for a cute English speaking girl to help. A viewer then offered to hook Bamboo up with his sister, a prospect our humble boss most graciously approved of.

Will there be more Higurashi? If you show demand for it (ed: read that as “buy the original and Kai”).

As some people may know, OVERDRIVE and Age are holding an event together on 24 June. Will there be an announcement? No, but “negotiations with Age are going steadily.” For what? Keep your eyes peeled!

In terms of contacting old eroge makers, Bamboo’s connections and associations only started in the early 2000’s, so vintage eroge would require opening a number of new lines of communication.

The subject of 999 came up, and Bamboo hopes that its exposure will help Kara no Shoujo upon release. (ed: Hint – Got friends who have 999 on their DS? Tell them to buy KnS!)

Taking a break from Q&A, Bamboo announced that after many delays, the comics section of Mangagamer.com will be opening in a month, and the video section will be open soon as well. While Bamboo’s not in charge of those areas personally, Kouryuu and I have seen the list of launch titles, and there are some real corkers and steamy classics there.

When asked how Bamboo became an eroge developer and what his family and friends think about it: “I was originally a creator of playstation games, but I was tricked into joining a bishojo game company! My friends and family are like, do what you want. Since I sing songs and stuff as well as make games, I’m in a bit different  situation. It takes a lot of work to start a company, but I’ve been able to make a living for the past 10 years by doing so.”

The discussion turned to the recent trend amongst us and our…er…friends(?) elsewhere of licensing projects which have fan translations and using those scripts and whether the threat of an unofficial edition made licensing easier. Bamboo replied that: “It depends on the company, and since the translation quality varies, we have to check it thoroughly anyway… and of course the Japanese companies are suspicious of the unofficial translations. Since the Japanese release is first priority, the overseas market is considered secondary.”

In a moment of candor: “Just a reminder, MangaGamer is still in the red, so please purchase our games. >< If you can, try to help us by boycotting illegal download sites.” (Ed. Seriously, please do. I like my job…) Bamboo also commented that OVERDRIVE games don’t make us extra money over anybody else’s as they’re used as experiments for releases and therefore use a lot of MG’s in-house resources, so share the love (and your Euros) equally.

Our best selling titles: #1 Koihime, #2 Shuffle. Worst selling: That’s a secret. Bamboo also pointed out that Navel’s president may not even be aware of how well his game’s doing for us, as he’s the most laid back company president Bamboo knows.

The next one loses something without the video, so complain to Kouryuu that we can’t cut it out.

Q:  What plans do mangagamer have against piracy?
A: Kill them all. (Yes, Bamboo answered in English.)

Chances of an Edelweiss or Kira Kira anime? Doubtful: “It’s really expensive to produce an anime. Even for a 13 ep show, it costs like a million dollars to create.”

OVERDRIVE Nendroids? Bamboo’s up for it, depends on GSC. That said, OVERDRIVE have no plans to directly sell goods overseas. According to Bamboo, even figures and merchandise made in China have trouble clearing US customs.

In terms of upgrading prior releases to newer, expanded editions (e.g. DC to DCPC), it depends on sales. At the moment, it’s unlikely: “It’s costly for us to localize a title and if it fails, it hurts us bad…”

We know some of you have been asking for it, and the official line about Shin Koihime Musou: “We don’t have any plans to release Shin Koihime Musou at the moment, but since the sales were good, I’m sure we’ll start talking about it soon or later.” That said, “About the voice acting issue: since the voice actor agencies are hard-headed, they demand a lot and thus we have to release some games without voices.”

BL games? “We don’t have any plans for BL titles because I don’t really know how well they’ll sell…” (Ed. Are you out there, girls and gays? Show us you’re out there and that you’ll buy this stuff if you want it!)

Our friend Zalas from encubed inquired about games with further gameplay: “It’s difficult because porting them is a lot of work, and the game company needs to be really interested and has to help us. I personally would like to make a bishojo game like Fallout 3… if I had that kind of money.”

Will OVERDRIVE be making another music themed game? “For sure. As long as I’m still interested in playing music.” Soundtracks from MG? “We’re worried about piracy since they’d probably be uploaded on an illegal site as soon as it goes up. Thanks for the comments tho, really happy to know that American fans care about my songs.”

For everybody who’s been wondering what’s up with ef… “minori told me we should have something to look at soon. They’re taking everything seriously; sorry about the delay (although i have no control over it).”

In terms of hard copies, the future of LE’s are currently residing in the hands of DC/DCII. For standard editions, “we’re negotiating about future hard copies, but ideally I’d like to release all our games in package form. The most difficult thing, though, is how we’re going to sell them, since there isn’t really a concrete sales route other than at conventions.”

And on that sombre note, Bamboo brought proceedings to an end, thanking everybody for visiting and reminding them to come back to justin.tv for the next broadcast.

Also, though there’s no translation in the video itself, those who understand Japanese can watch Bamboo in the livecast here.