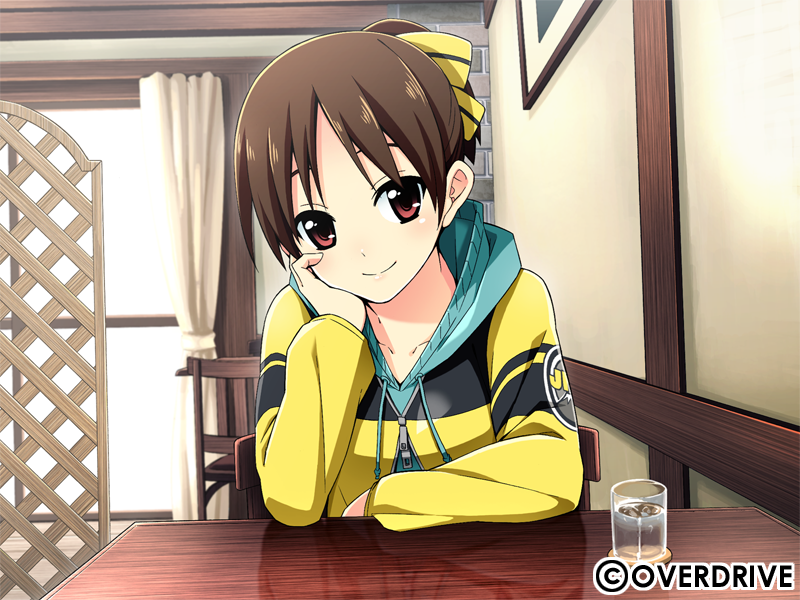 This time, we bring you word from Nurio!

Hello all! This seems to be the second time I got the honor of working on one of MangaGamer’s titles. So, what title is it this time? Hm…? Go… Go… Japan…? You mean, that title from OVERDRIVE… specifically designed for the western market…? Excuse me for a second… 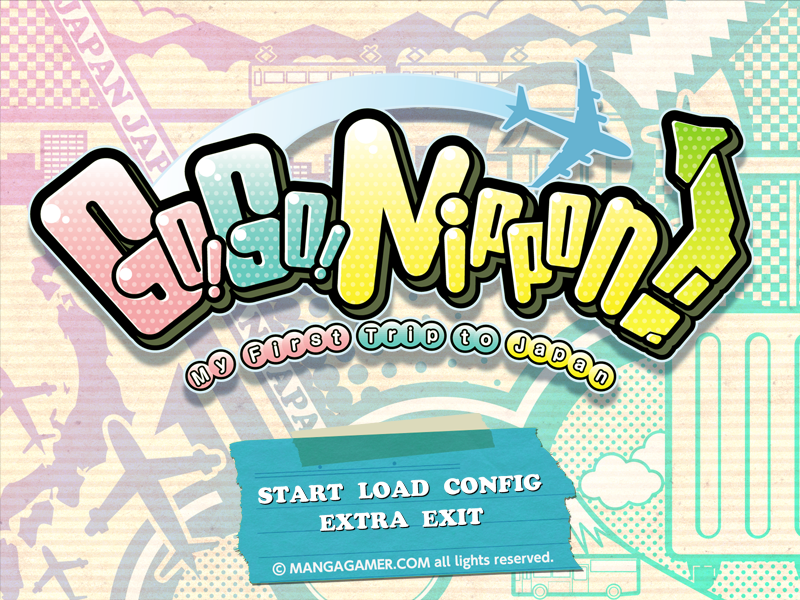 On the title screen I immediately get greeted by happy colors and… © MANGAGAMER.COM all lights reserved. Well damn, I wanted to buy some lights today, but I guess MangaGamer reserved them all. Can you please give one of those lights to me? It’s so dark here in my mom’s basement…

This is a visual novel where you can enter your name and it will be used throughout the game. You know what that means, right?

That’s right! I wanted to go with Sexy McMuffinFluff, but that didn’t fit. So it’s Sexy McMuff. Meh. Aside from your name, you can also enter a conversion rate to a currency of your preference. That way, you can see how expensive Japan is in Euros or Dollars. (And if I can help it, in Pounds too!)

So, the game finally begins. The main character is a guy who really loves Japan and finally sees his dream come true, traveling through this fantastic country. You might’ve already guessed it, but the main character is a bit of an otaku, but he’s far from the creepy level (like, uhm… this). He found two friendly gentlemen on the internet and is staying over at their place during his trip to Japan.

Wait, they’re gentlemen? Not… girls? I don’t want to be guided by guys! I want girls! This is the worst game eve- 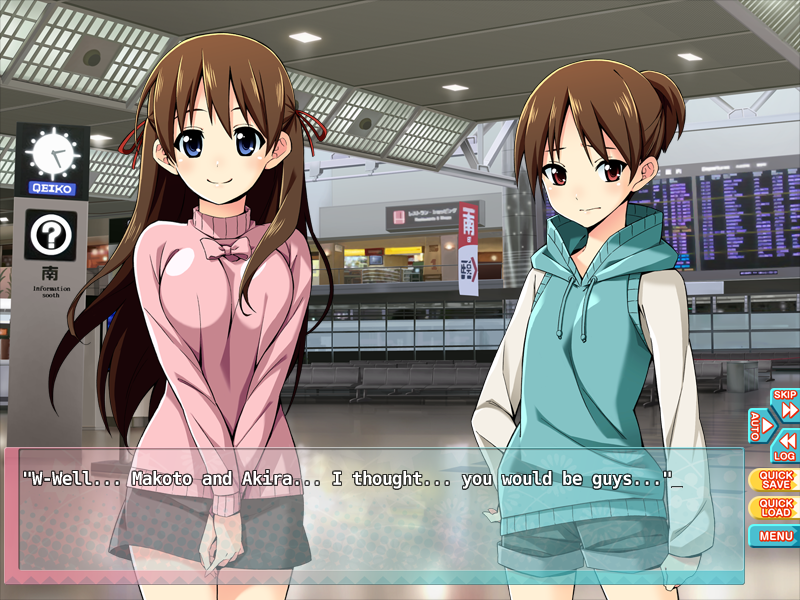 -r…!? Oh, OVERDRIVE. Oh, you. Well played… well played. You had me fooled there. Seriously, how did Sexy McMuff think they were guys all this time? Didn’t he a/s/l?

So, luckily, they’re girls after all. After reintroducing himself to the girls, Sexy McMuff heads off to their house. From there, you can pick a sightseeing spot every day, and whatever you pick determines which girl you’ll end up with. You need to play through the game twice to see all the sightseeing spots, which nicely fits with the two endings in this game. Go! Go! Nippon! and all Japanese little facts it teaches you are really interesting, and I have to say that I have learned a lot of things; big things like which Japanese shrines are the most important, and the little things like DO NOT ORDER PIZZA IN JAPAN. Seriously, don’t.

At each sightseeing spot, there’s a neat button labeled “Show Photo.” What this does is open up Google Streetview for you and it shows you a photo of the sightseeing spot in real life! 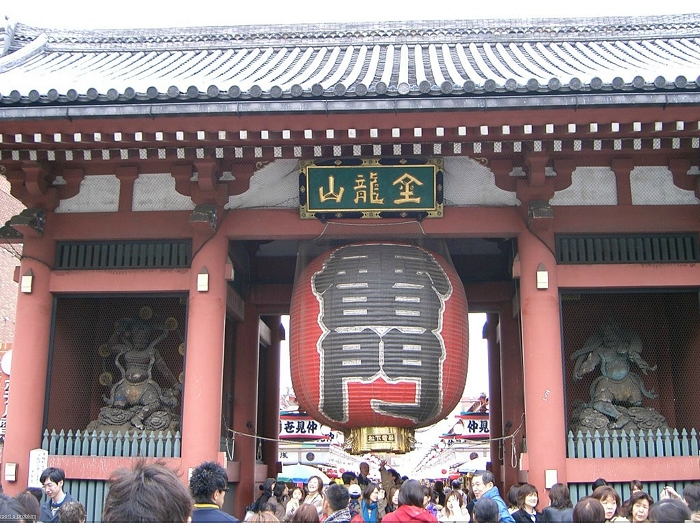 Hello, innocent people of Japan! Please do not mind me looking at you through the internet. Please do not worship me. I am not a god – I am merely very much like one.

When your week in Japan is up and you go back home, you can see how much money you have spent. So, they say Japan is expensive, but it can’t be that bad, rig- 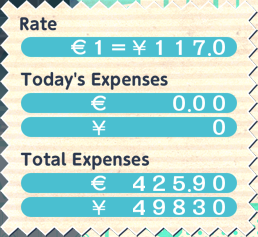 Holy smokes… Well, maybe if I look real sweet at my mom, she’ll pay it for me…

All in all, Go! Go! Nippon! has been a very enjoyable experience and I recommend it to everyone who wants to learn a thing or two about Japanese culture and history. I have to say it almost felt like I was there myself, with the way Sexy McMuff was amazed at everything.It really makes me want to make a trip to Japan myself one day.

As mentioned before, Go! Go! Nippon! is a game that has been developed specifically for the western market – and that shows. First of all, some people may have already noticed, but for (almost) every English line the game, the Japanese equivalent will be displayed above it. It’s all so you can learn some Japanese language while you’re playing this game. Verii naisu!

But worst of all is, since this game is developed for the western market, it was still in the production phase when I was beta-testing it! Why is that a bad thing? Well, imagine this. The cute girl from above (the left one) is taking a bath, and you run in on her while she’s busy. And what I got to see, was this… 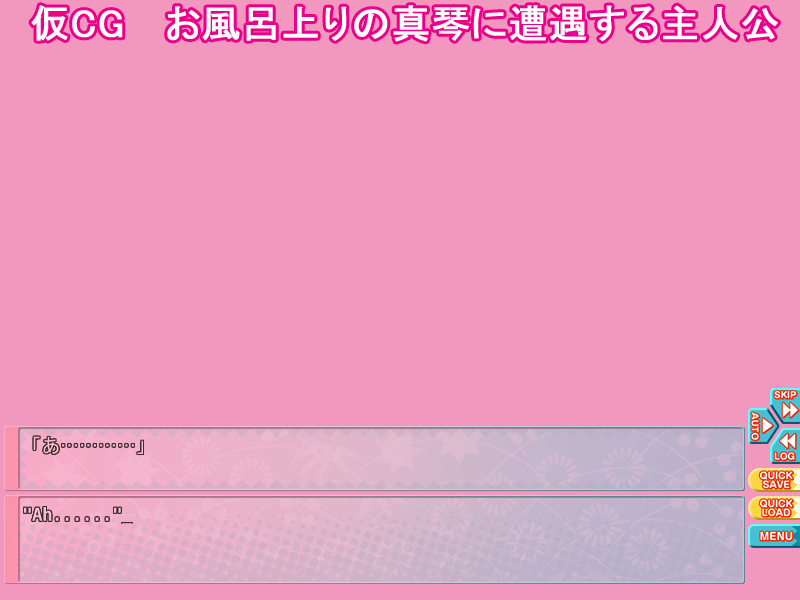 Translation: “Projected CG – Main Character encountering Makoto as she’s getting out of the bath.” But it might as well have said “No CG for you, suck on that. Problem, Nurio? U mad?” All that is missing is a troll face. That’s right, it had placeholder CG. And some of the background images and music were (probably) placeholder too!

And that’s not the only hardship I faced. As you might see above there, Makoto’s lines are pink. Akira’s are light blue. And I… am colorblind. For most colorblind people, this is probably okay, since they mix up red with green. But of course I have to have that colorblindness that mixes up pink and light blue! 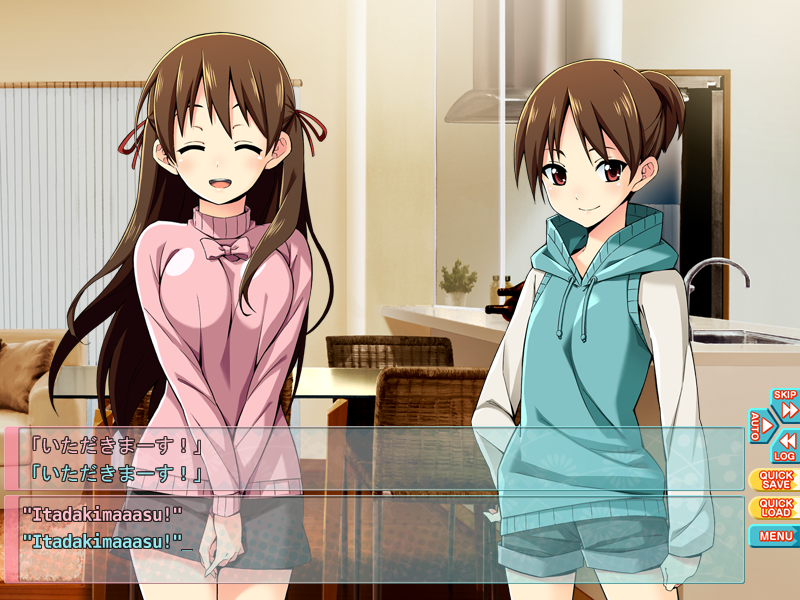 Seriously, who’s saying what!? Well, they’re both saying Itadakimasu, but you know what I mean…

Of course I am not really complaining about trivial things like that. I would never do such a thing. *twitch* I’m just saying that this game trolled me on four fronts. It fooled me at the intro. It teased me with placeholder CG. It confused me with similar colors… And my collected CG gallery is virtually empty. I want to see a gallery full of images when I finish a game. My OCD collecting mind cannot handle an empty CG gallery!

Anyway, to  end this Tester’s Corner on a happy note, I want to set aside my own miseries and make forumgoer Yirba a happy man… woman… something. He/She/It wanted to know if the MangaGamer mascot (She still doesn’t have a name…) is in the game. Well, she is in there! She really is! 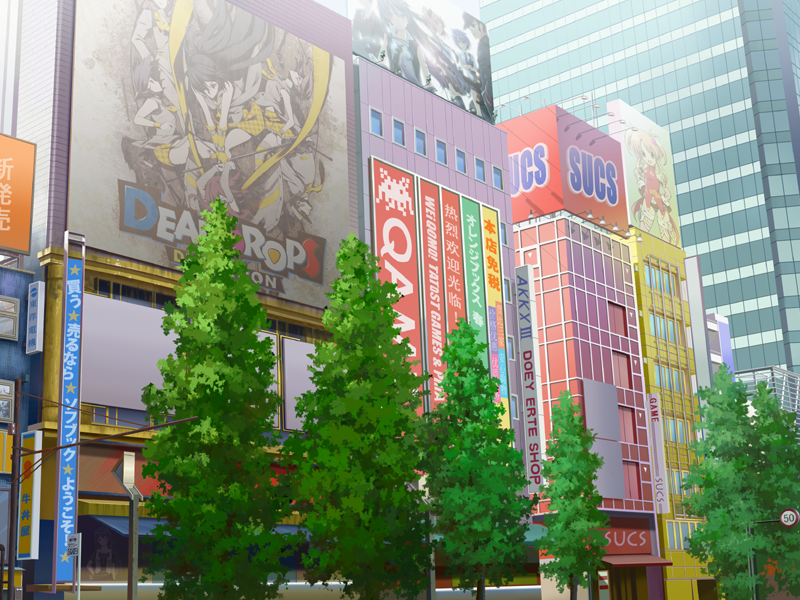 All joking aside, I really enjoyed this game and learned a lot, and I certainly recommend it to those with even a little bit of interest in the Japanese culture and history.