This year at Anime Expo, we at MangaGamer are proud to announce the addition of three new brands, three new titles, and three new genres for our company!

Set in an alternate universe where Earth is connected to Kadath, an alien planet reminiscent of Lovecraft’s Dreamworld, Engine technology from this alien world has rapidly advanced civilization at the cost of horribly polluting Earth.

In Gahkthun, join Nikola Tesla, an electrified, super-heroic detective as he travels to an independent scholastic city on an artificial island off the coast of Marseilles, The Academia, in order to investigate the mysterious intrigues plaguing the school and its students.

Fight alongside Tesla and his electrical brilliance as he faces mysteries, secret societies, and mecha!

Next up, we’re proud to announce our very first otome game license!

We’ve partnered up with Poni-Patchet to bring OZMAFIA to the western audience!

OZMAFIA follows the tale of Fuuka, a girl with amnesia who doesn’t remember her own name, once she’s rescued from the streets by members of the Oz family mafia. She begins trying to do her best in this dangerous city where several different rival mafia gangs are constantly at war for control and territory.

As Fuuka tries to make do for herself amidst this danger, what fate lies in store for her? Will she grow close to one of the members of another faction? Will she fall in love with a member of the Oz family and face a love-triangle over her affections? The choice is yours!

We’re partnering up with pa-rade to bring the brand new BL-game, No, Thank You!! — a BL-game both women and men can enjoy!

When the protagonist saves a man from an out-of-control car, he loses his memories in the accident. With no means of identification on him, the man he rescued takes responsibility for him and brings him to a little bar on the outskirts of downtown call ‘sotano’.

Here at this cozy-looking jazz bar, the newly named Haru begins working as an apprentice bartender while hitting on his male coworkers and thrusting his way deeper into the dark side of their business–serving as detectives who take on cases even the police and legitimate agencies won’t touch. 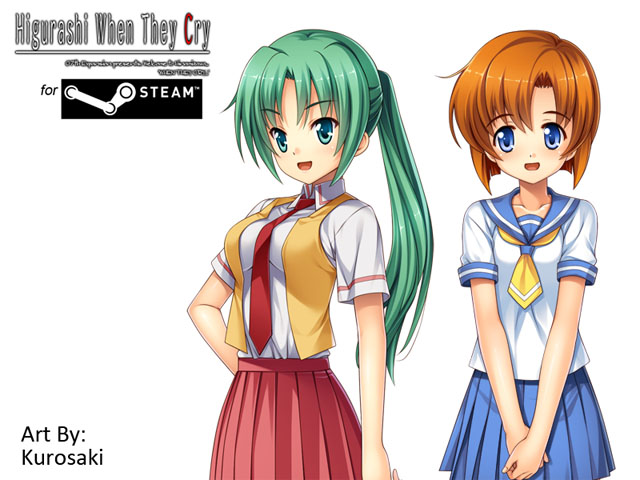 And lastly, we’re proud to announce our special surprise–Higurashi will be getting updated sprites for its upcoming Steam release! The new sprites are being illustrated by Kurosaki from Caramelbox, who previously worked on Uhou Renka. We will be releasing Higurashi by the chapter, so we hope to have the first chapter of the updated release out by the end of year! We’ll also be selling the new version on our website as well. Those who buy the new version from our website will also receive Steam keys for the game. The old version with the original sprites will continue to be sold on our website as well, and all current and future owners of this version will also receive the updated translation at no additional cost.