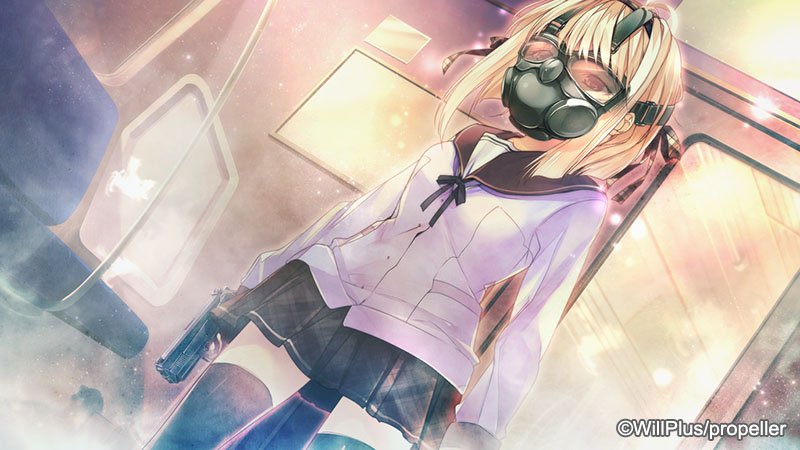 Hey everybody, Ryechu here! This is my seventh beta test for Mangagamer, and I think I’ve finally got the hang of things. Let me tell you about this awesome game from Propeller: The Shadows of Pygmalion!

Okay, so I was asked to work on this after finishing the beta test for A Kiss for the Petals – New Generation! because, of course, I love yuri/shoujo ai titles. Admittedly, I wasn’t very familiar with Pygmalion when I was asked, so I did a little research on VNDB before saying yes, and then I came across a specific tag: Personal Armed Combat. 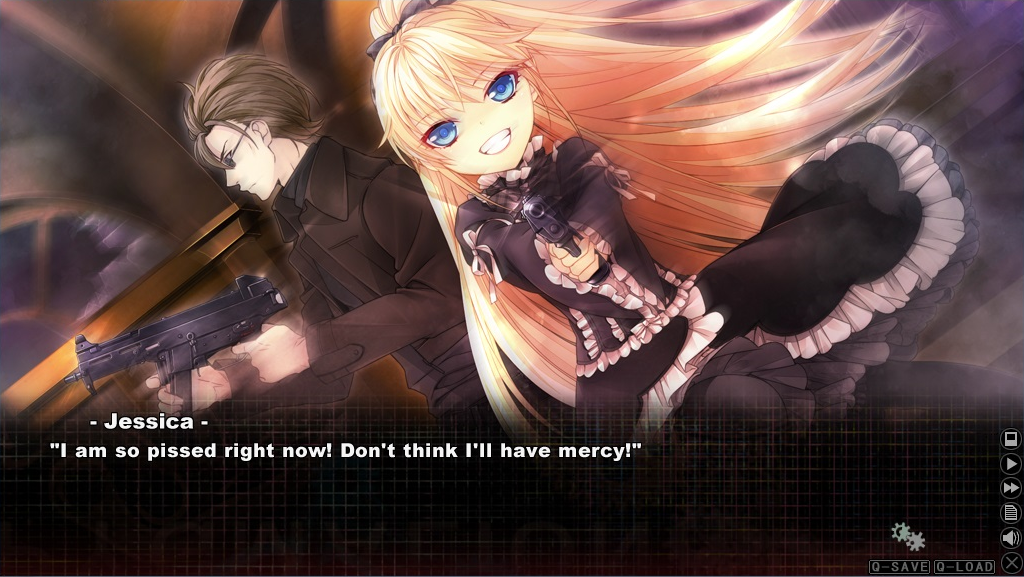 Needless to say, I was all for picking this up.

Originally released in 2013, The Shadows of Pygmalion starts out with quite a lot of set-up. You assume the role of Hajiro Mina, a rather docile girl who is living out her life like any other high school girl would. You’re in a group with a few other girls, including one Aizawa Makoto. Voiced by Kitamuri Eri (Samael – Tokyo Babel, Chiester 410 – Umineko, and, my favorite: Kawashima Ami – Toradora!), Makoto is that girl who always wants to be at your side. And generally, she gets her way.

And then some weird things happen. Mina comes across a massive mansion, and contained within are a ton of secrets that change her life forever. It is during this time that she is made an emissary: essentially a warrior that fights for a character named Ruka. Mina then meets her fellow comrades-in-arms in rather quick succession. Mina is told that she will eventually have to actually fight in the name of Ruka, and Mina’s unsure about the whole situation.

From this point on, Mina starts to hang out with two of her fellow emissaries, Riko (the refined, quiet type) and Jessica (the hyperactive half-Japanese girl). This, of course, pisses Makoto off to no end, and things start to happen. For the sake of not spoiling the game, I’ll just say that it’s absolutely worth the ride. 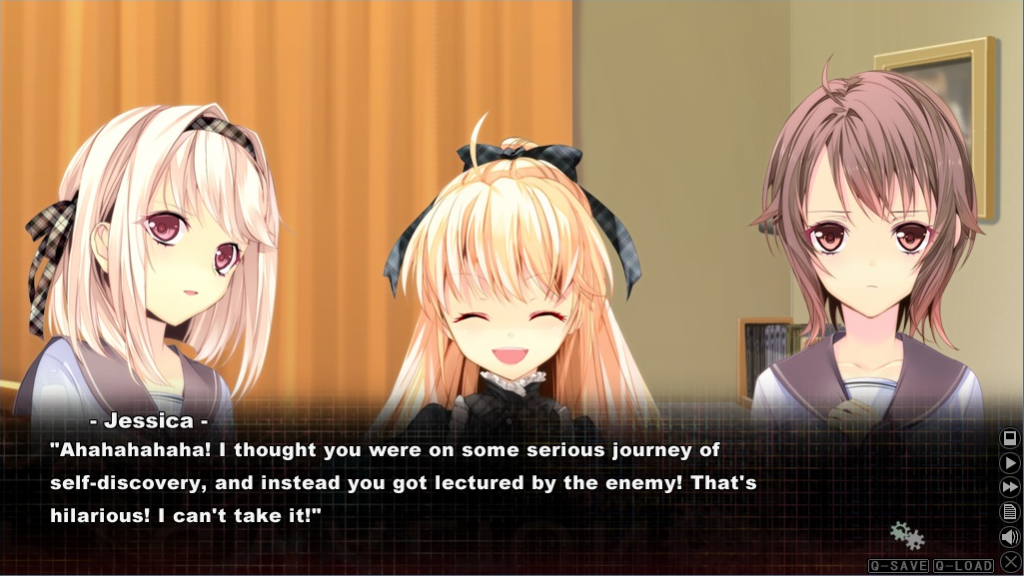 You had ONE job!

This was the first time I had the opportunity to work with Ritobito (editor) and fnord (translator), and I had quite an enjoyable time! Reading the prose from these two excellent writers is a breath of fresh air from all of the stuffy academic papers I’ve been having to read lately for school. Now, granted, there were a few words here and there that I had to pick up my dictionary out for, but that thing gathers a lot of dust because I tend to stay with what I know, and this was an exciting change of pace!

We did have  few pretty funny problems during the beta test, one of which revolved around the fact that the original script had all of the italics markers wrong. It was pretty funny to be reading along to find a line that would be missing a letter and then the rest of the sentence would be in italics. One of the script commands actually caused the text to become incredibly small at one point, too. 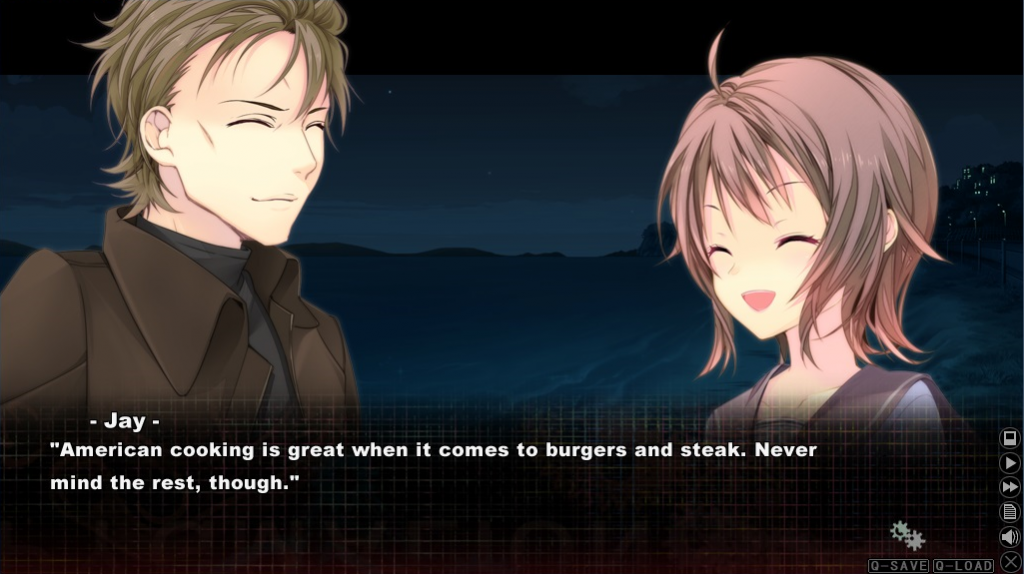 The Shadows of Pygmalion is considered all-ages, but there are a few scenes that cut it close, and since I love yuri, I of course enjoyed them thoroughly. My favorite character? Jessica, hands down.

One more thing, be sure to play all the routes! After you finish all of the routes, a new route will appear! And when you complete THAT route, play the game one more time! There are a few extra scenes you get for finishing the game, and one of them is quite frankly one of the craziest things I’ve ever read. It’s just the right amount of creepy, and you need that in your life. I promise you. 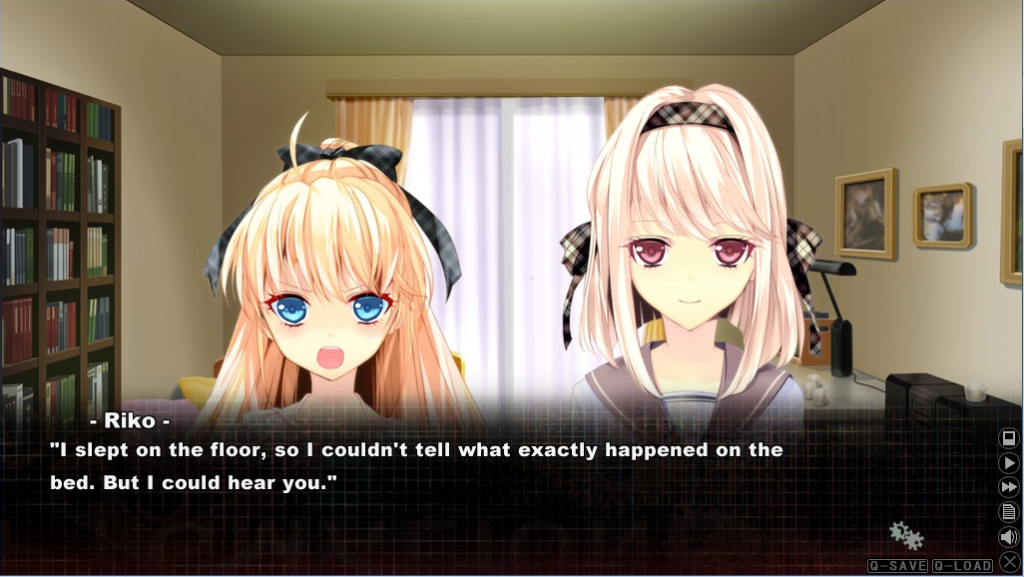 Be sure to pick up this title! It was a lot of fun to work on, and even more fun to experience!