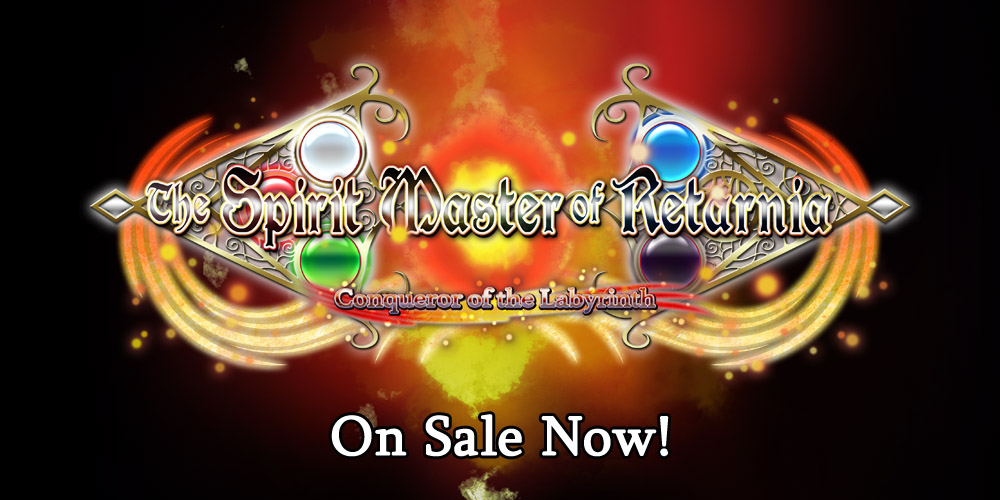 Hello there ladies and gents! Mojack here reporting in as a fresh, wet-behind-the-ears beta tester! I cannot express how much of an exciting experience it was to be part of the creation process for the visual novel medium I’ve loved for so many years. From the moment I began to the moment I submitted my final report, I was giddy like a young ‘un on Christmas morning. That’s enough gushing over my fortuitous situation, though. Let’s jump into why you’re reading this Tester’s Corner: The Spirit Master of Retarnia.

I went into this beta essentially blind. I was unfamiliar with Luna Soft as a developer and I did little more than look at the promo image on the “Project Status” page to get a glimpse of what some of the characters look like. I also knew that there would be some sort of dungeon crawling mechanics but that was the extent of my knowledge before starting. This was great because I got to play the game without any preconceptions. 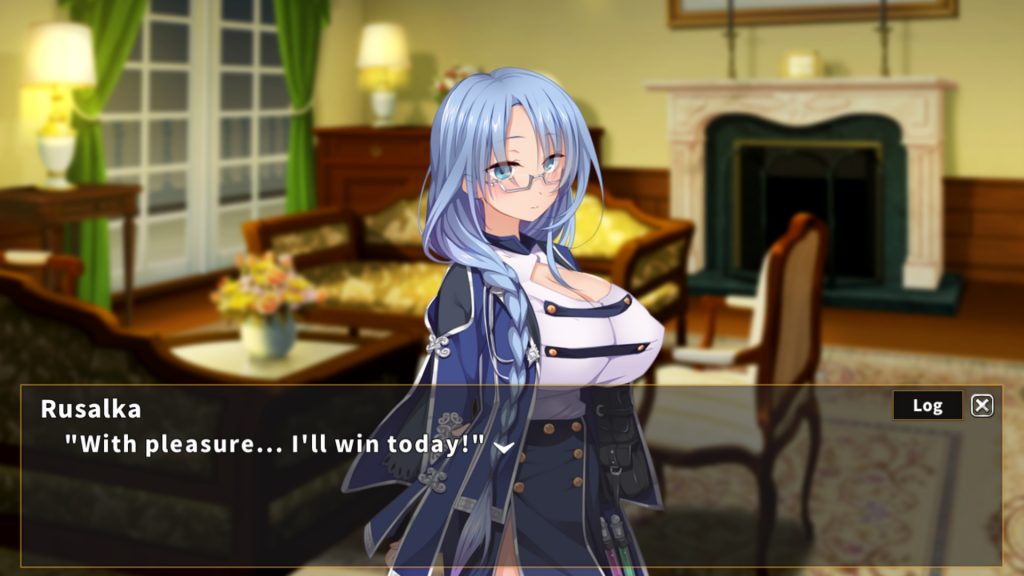 This was my mentality going into the beta

The Spirit Master of Retarnia follows Leonard, the titular Spirit Master, who is tasked with subjugating the demons found within a portal that recently opened in the kingdom of Retarnia. He is assisted by the five elemental spirits that he summons forth: Norn, Rusalka, Vesta, Melissa, and Eris each represent light, water, fire, earth, and darkness, respectively. It’s not the most grandiose of stories, and Leonard isn’t necessarily the most dynamic of protagonists (he literally has a black silhouette for a character portrait), but the Spirits and supporting characters around him are clearly the stars of the show. 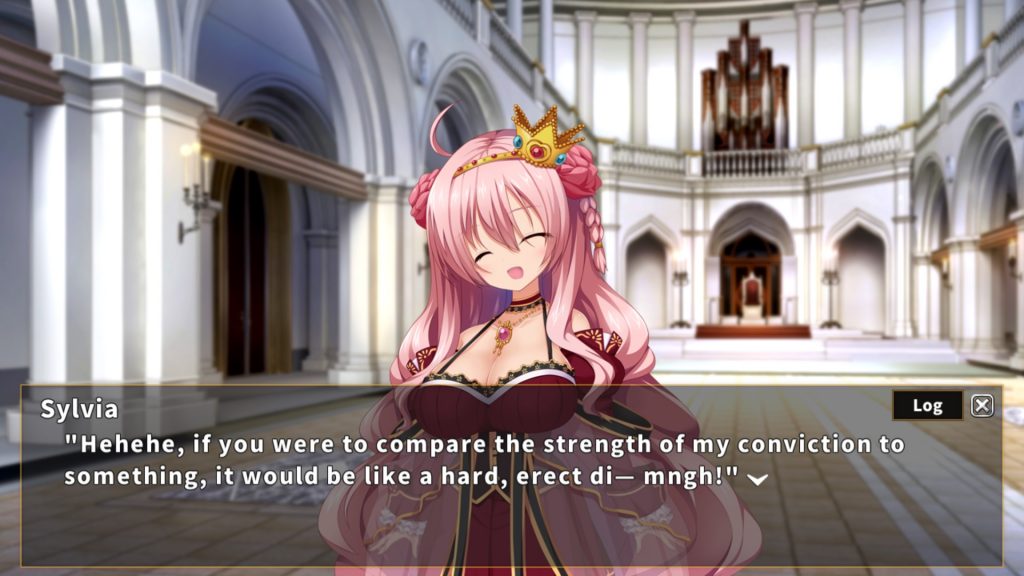 Sylvia is a national treasure and must be protected

While there aren’t traditional “routes” in this game, you can still go about romancing each of the five spirits by assisting them in dungeons, hanging out with them in town, and giving them gifts. Reaching certain affection levels unlocks each spirit’s H-scenes and allows Leonard to use certain skills from the spirit in battle. You can only fully romance one spirit per playthrough, however, so choose wisely. I ended up romancing Rusalka my first time through because I liked the contrast between her mature appearance and her pseudo-innocent curiosity towards all things.

Besides the story and wooing of spirits, though, there are the dungeon crawling aspects of the title. Anyone who has played a game in the genre will be instantly familiar with the step-by-step, floor scrawling mechanics present in The Spirit Master of Retarnia. It’s vanilla dungeon crawling to a T, which is great for breaking up the pace in the story. Encounters are random but the rate can thankfully be modified up or down by a pair of skills Leonard has.

While there is no reward for fully mapping a floor, the completionist inside me couldn’t help but not move on until I saw that 100% displayed beneath the map. It brought me an intrinsic satisfaction even if I didn’t get anything out of it besides a few stray potions laying around here and there. 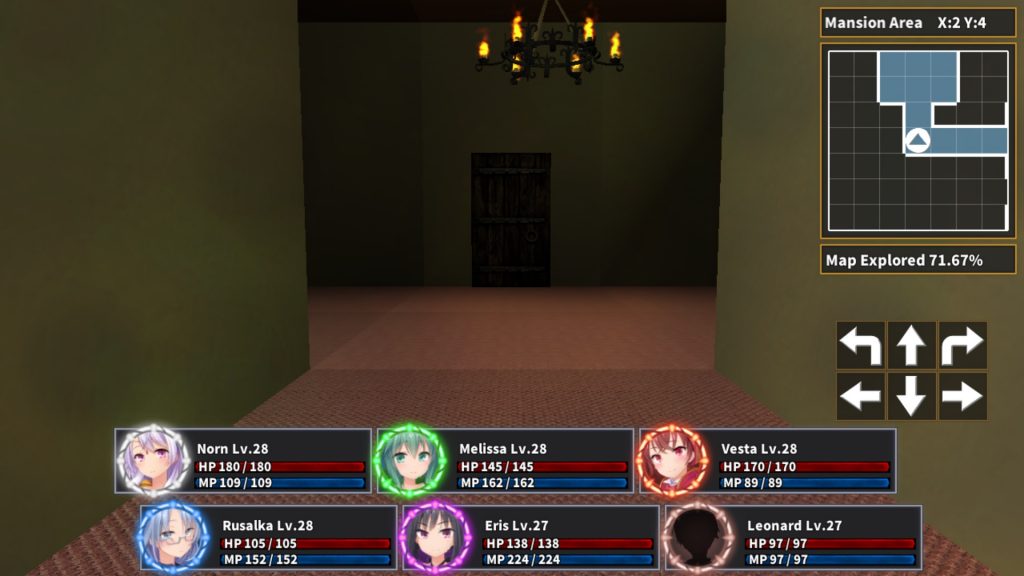 Only 71% mapped? Not good enough for me!

Equally satisfying was watching your spirits’ fighting potentials grow over the course of the game. Going from slowly whittling down enemies one by one to nuking a whole group and recovering the MP spent in the same turn provided a worthy sense of empowerment. Bosses, on the other hand, still gave me trouble and sometimes required a little trial-and-error. They were never so overbearing as to be unfair, though. 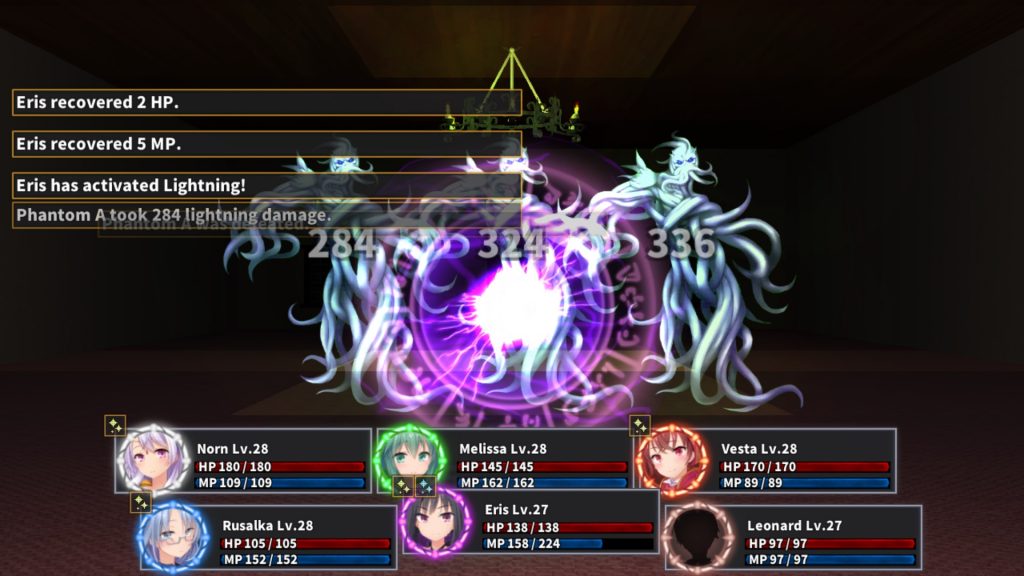 Area of effect nukes are such a cathartic release

It was my pleasure to test The Spirit Master of Retarnia as my first beta assignment. Not only was the visual novel itself was a joy to go through, but it was also an eye-opening experience behind the inner workings of game development and localization. This is definitely the kind of game I could play to unwind from a long day of work. The story is short, simple and sweet, the dungeon crawling is just the right amount of stimulating, and the girls are cute. What more could you ask for?

The Spirit Master of Retarnia is now available on MangaGamer.com!