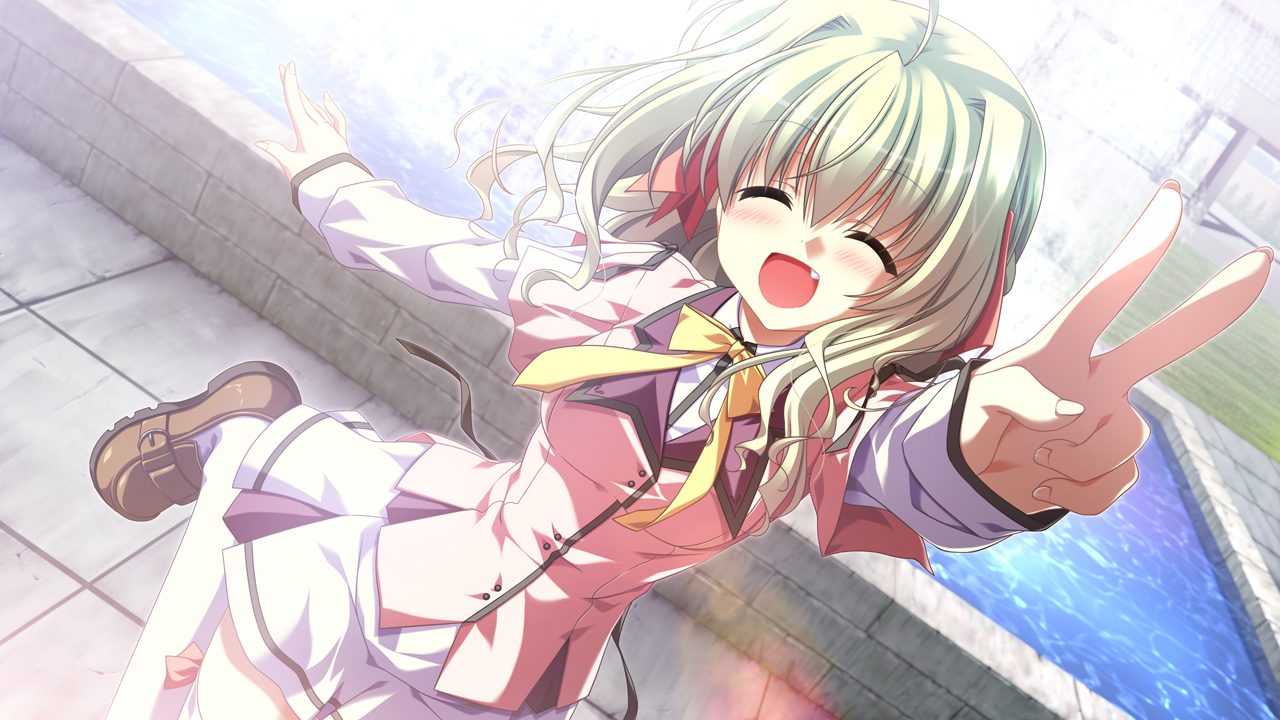 Today’s Tester’s Corner for Supipara Chapter 2 is brought to you by Nurio!

Boom, baby! I’m back… again! And so is Supipara with Chapter 2 of its story. Hm? You’re saying I already used this header image in my previous Tester’s Corner, and that this image doesn’t even appear in chapter 2? Sure! But look! It’s Momiji, and she’s showing us the number 2. It could not be more appropriate!

But man, going back to Supipara after having spent time with it in Chapter 1 was quite an experience. The moment I started the game and heard that music again, it did cause some emotions to well up inside me, like some warm hug from an old friend you hadn’t seen in years because he accidentally ran over your mother with his car twice. Luckily there are no cars in Supipara (neither Chapter 1 nor Chapter 2), though there are mothers! 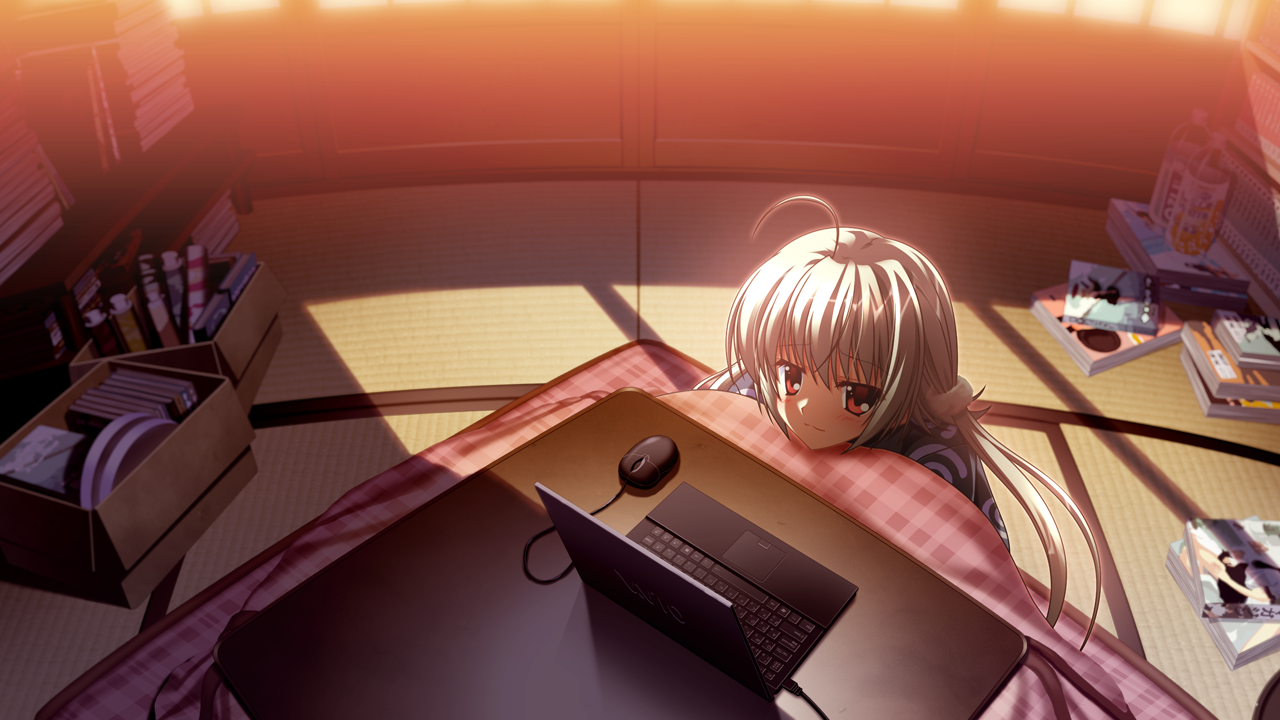 Alternatively, you could say returning to Supipara is like sitting under a warm traditional American kotatsu. Just look at how comfy that looks!

You guessed right! Everybody’s favorite mother returns in Chapter 2, because she simply likes being like all that. “Like all what? Be more specific, Nurio!” you ask and rudely demand? Ryouko is simply an entity that cannot be defined by mere words, much like most characters in this game. And let me tell you about all the other characters in this game in the next paragraph. 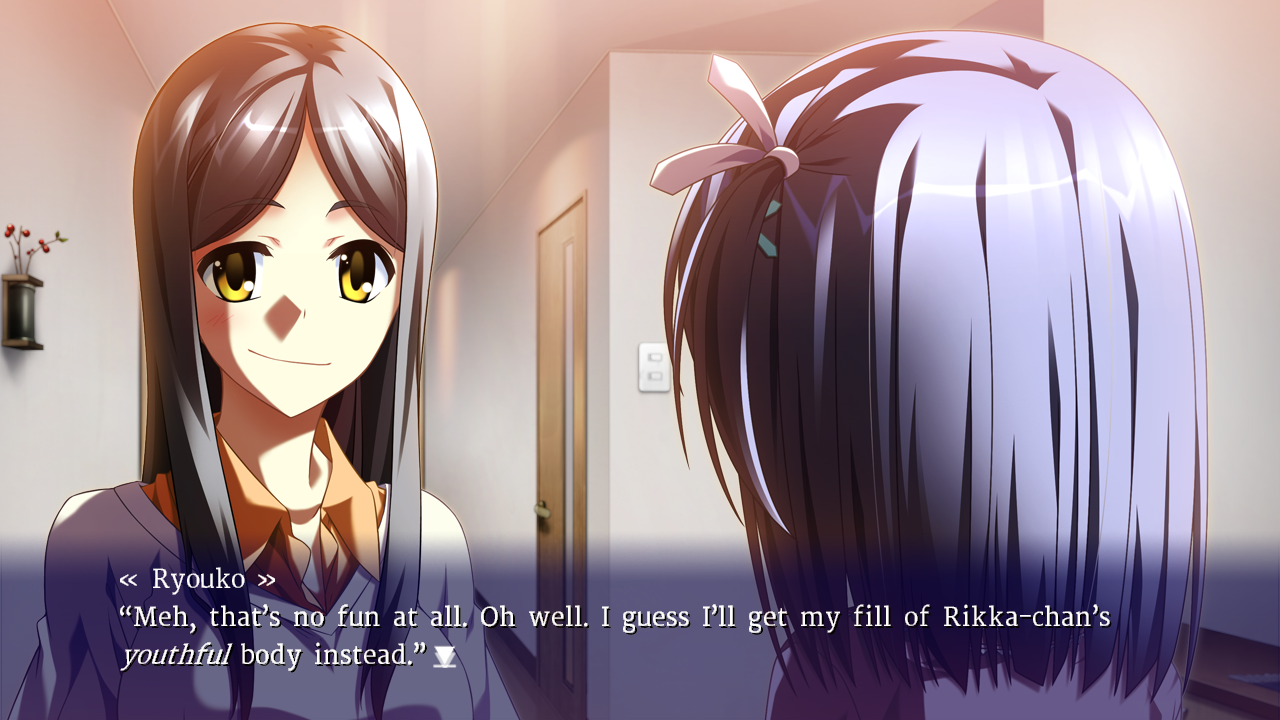 Yeah, Ryouko really is in a league of her own…

“What was the point of the last paragraph? Be more concise, Nurio!” you ask and rudely demand? I’m sorry, concise? Have you met me? Anyway, it’s called a bridge, to connect one paragraph to another. It stands to rea—No, I’m not gonna do that again.

Know who does do that again, though? Do what, you ask? It doesn’t matter! The answer is Alice Kamishiro! She returns in this game, in case you were doubting she’d return with the subtitle of this game being “Alice the Magical Conductor”. …Am I the only one who thinks of a train conductor when reading that? Now I wanna see Alice with a train conductor hat… 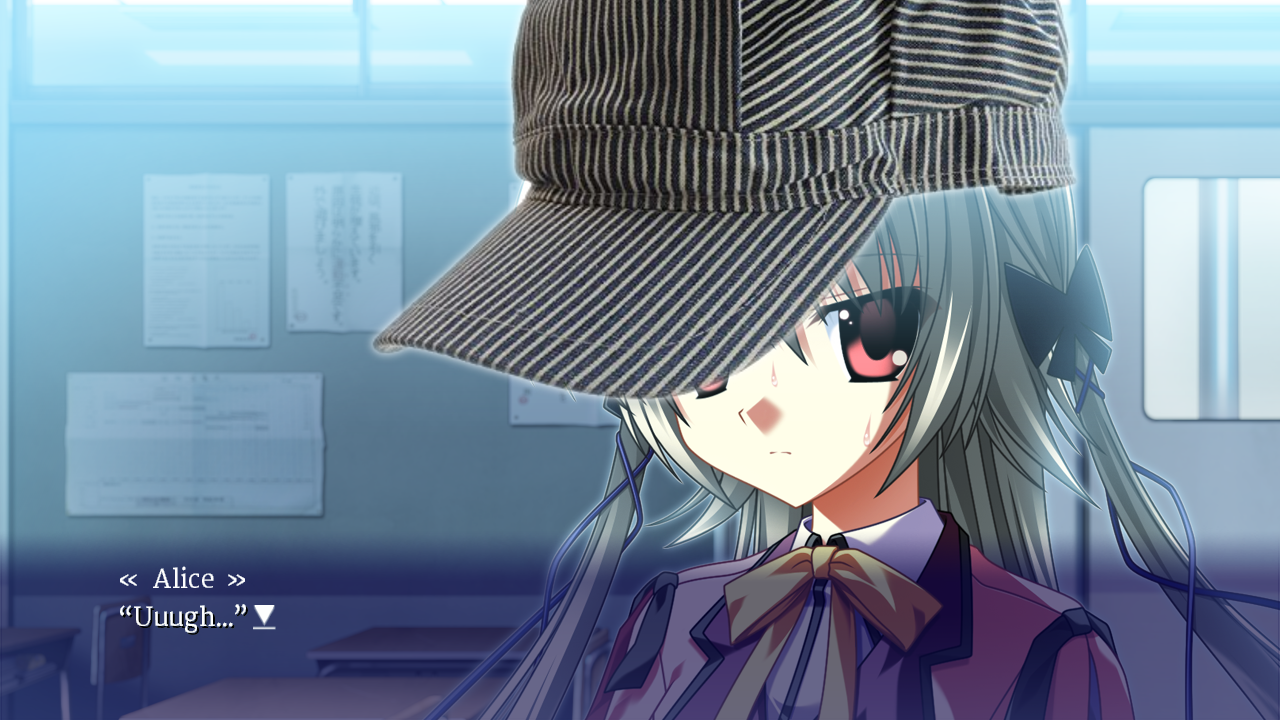 Aww, isn’t she cute? And look, she likes it!

Actually, basically all characters return in this Chapter again. …Except for one. Can you guess who? That’s right, it’s Kyouko. You know, the one who committed the cardinal sin of never having met Momiji even once in Chapter 1? Now you know what happens if you commit said sin: You get erased. Hard. And that’s what you deserve. 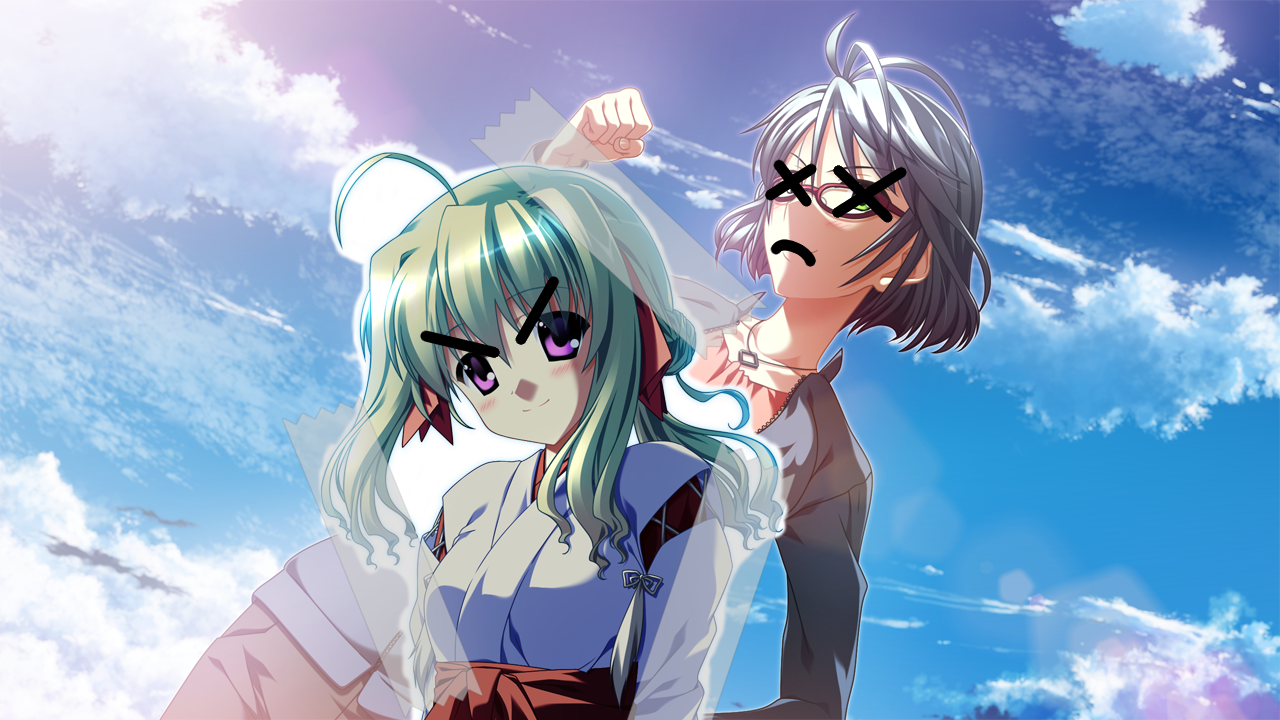 Momiji, our eternal girl who knows no sin, of course also returns, and man, she is even more pushy in Chapter 2! In a good way, I promise! Before, she was seemingly content with just interacting with Yukinari ‘normally’, but now she really seems to push for… hm, well, I’ll let you find out for yourself what she is pushing for, but it’s very hnng. Very hnng, indeed. Trust me. If I say something Momiji is hnng, it’s hnng. 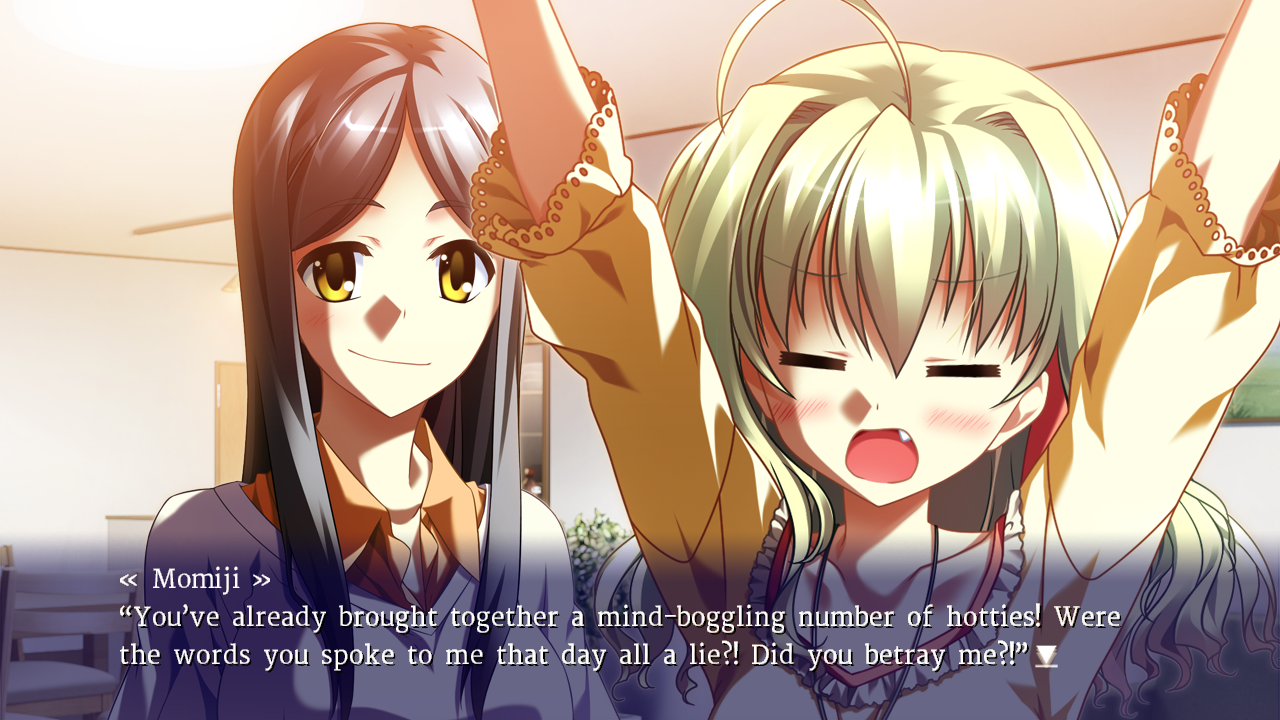 There are also two new characters introduced in Chapter 2, so even if you feared the VN would become more boring with one fewer character, you… well… won’t need to fear that, because… well… yeah… there aren’t any fewer characters in this Chapter… there is actually… one more… Man, I thought I’d deliver that fact with more pizazz, but I guess I flunked that one. Happens to the best of us, right? Right. Glad you agree.

So, in Chapter 1, the focus of the story was Sakura, your second cousin, but in Chapter 2, we kinda ditch Sakura for Hotaru. Poor Sakura… Your spunkiness and cheerfulness will be missed. Anyway, like I said, the story now follows Hotaru. Y’know, that half-French girl I absolutely, positively loved to pieces. And… Hold on. Before I can continue saying I love Hotaru, I need to do a little something. 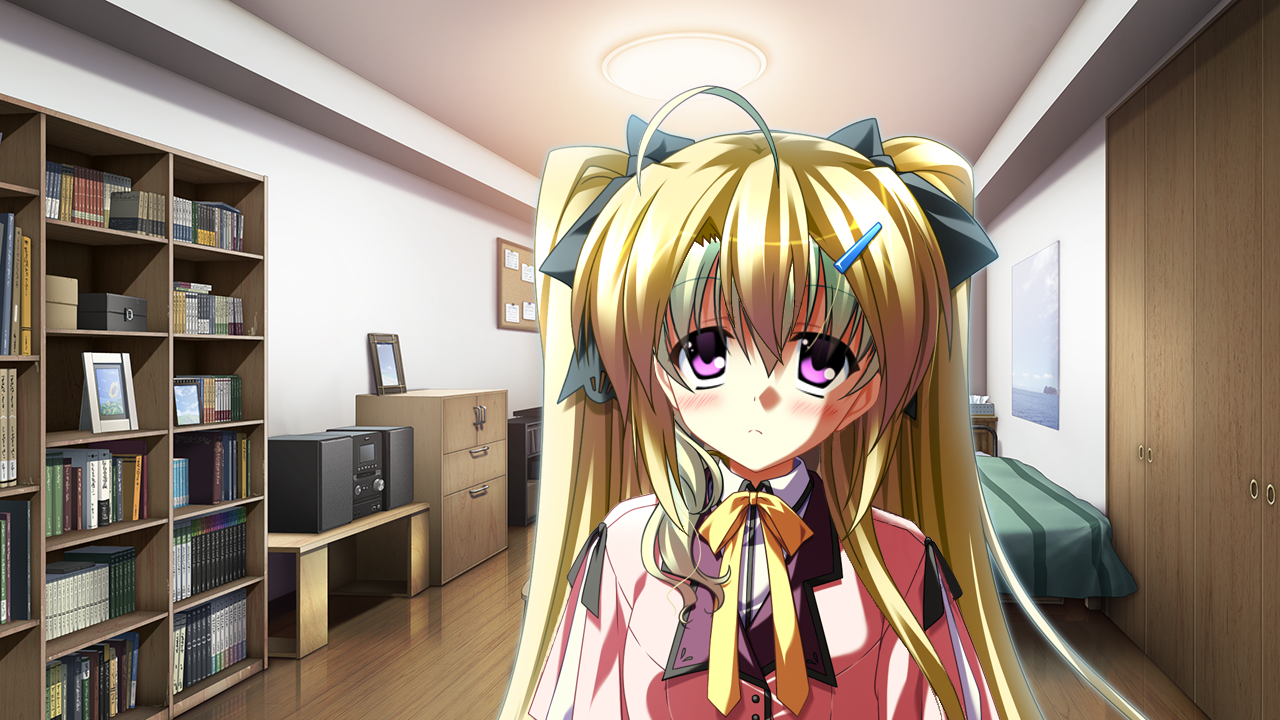 Meet Hotaru. This is not Momiji wearing a wig. This is Hotaru Angeline Amano, the girl I love and the focus of Chapter 2. And she—

Onee-chan? What? Stupid? I spent too much time on this for you to say this looks stupid!

But she now has two different hair colors…

Well, what did you want me to do? Shave her bald? Besides, her hair color is hardly different. It’s gold blonde and platinum blonde.

Nuri-kyun… Her hair is kinda green. 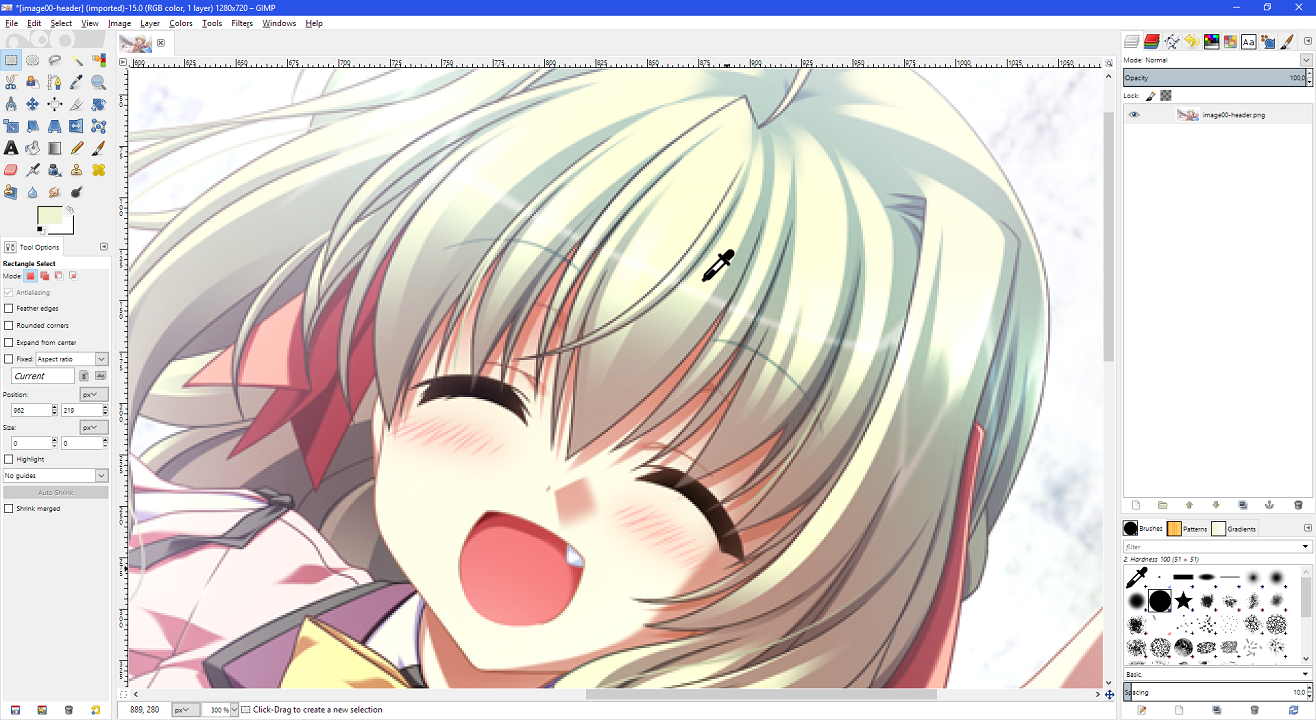 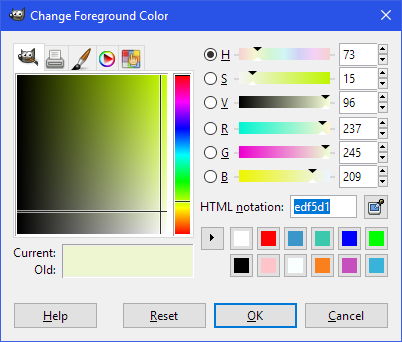 Tusk? What color is tusk?

Looks closer to yellow to me! Look at how close the circle is to yellow on the color wheel! Momiji is a blonde, and that’s final!

Ungh… I’m just going to subtly divert the topic by saying I used this app to check the hair color: http://chir.ag/projects/name-that-color/

(Yes, I am legitimately colorblind and have to make use of tactics like this to figure out what color something is.)

Poor Momiji… Being forced by my obsessive imouto…

Otouto, not imouto. And Hotaru, not Momiji. Besides, she’s not being forced. Mo–Hotaru, can you give us a smile? 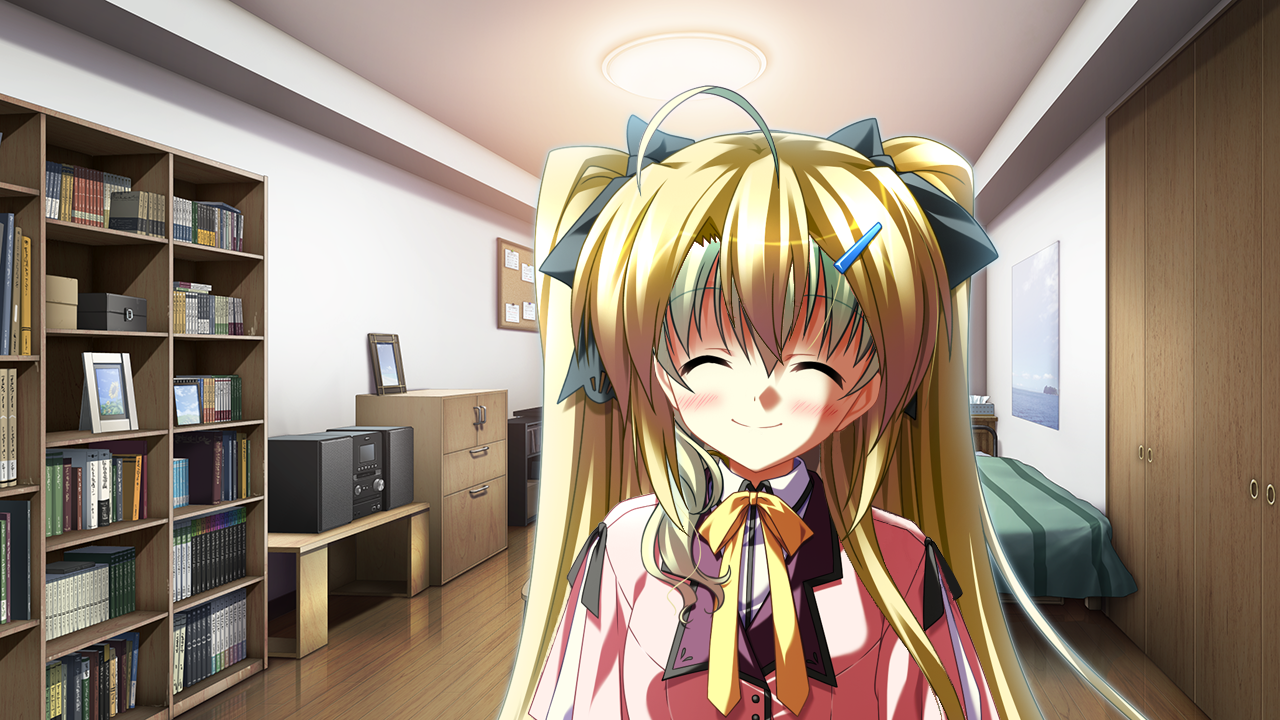 Ew, all I see is that you’ve got a stain in your pants…

Anyway, I’ve digressed enough. The story of Supipara Chapter 2 is actually interesting. If you see Chapter 1 as the introduction, then Chapter 2 is definitely where the real things happen. Don’t worry, Uncle Nurio never spoils anything. I’m only saying you’ll have some good stuff waiting for you if you already liked Chapter 1… even if you didn’t really like Hotaru, trust me! At the end of the Chapter, you’ll actually start to like Hotaru, like some kind of victim of the Stockholm Syndrome. Yay!

But what am I saying? Everybody loves Hotaru. Just scroll up a little and look at that smile from I Can’t Believe It’s Not Momiji™. How can you not love that? So really, you’ll be fine!

As long as you spend hours in Photoshop…

Excuse you, I don’t use Photoshop. …That’s way too expensive for my budget.

I’m not sure if the following counts as a spoiler, but if you’re super sensitive about spoilers like me, simply skip this part as I will be talking about the very beginning of Chapter 2. Just look for the bolded text toward the end of this TC. That’ll be your beacon of hope as it’ll be safe from there on out again.

So, it’s interesting because the beginning of Chapter 2 actually follows the beginning of Chapter 1 somewhat closely. If you’ve played Chapter 1 and remember it well, you’ll even recognize certain parts or even certain lines. Of course, after a while, Chapter 2 will deviate more and more from Chapter 1 as you gravitate more and more toward Hotaru. And that’s something I really like. …Though, I may be easy to please.

Yeah, you are… A girl only needs to smile at you…

No, no. Just a certain girl. Not all girls

You could also kind of make a game out of it, where you are trying to spot the similarities and the differences between the two chapters and how these differences happen. At that point, it even becomes a bit of a detective game. Why did these changes happen? For what reason? For what purpose? And who killed the Landlord, in which room, with which weapon? 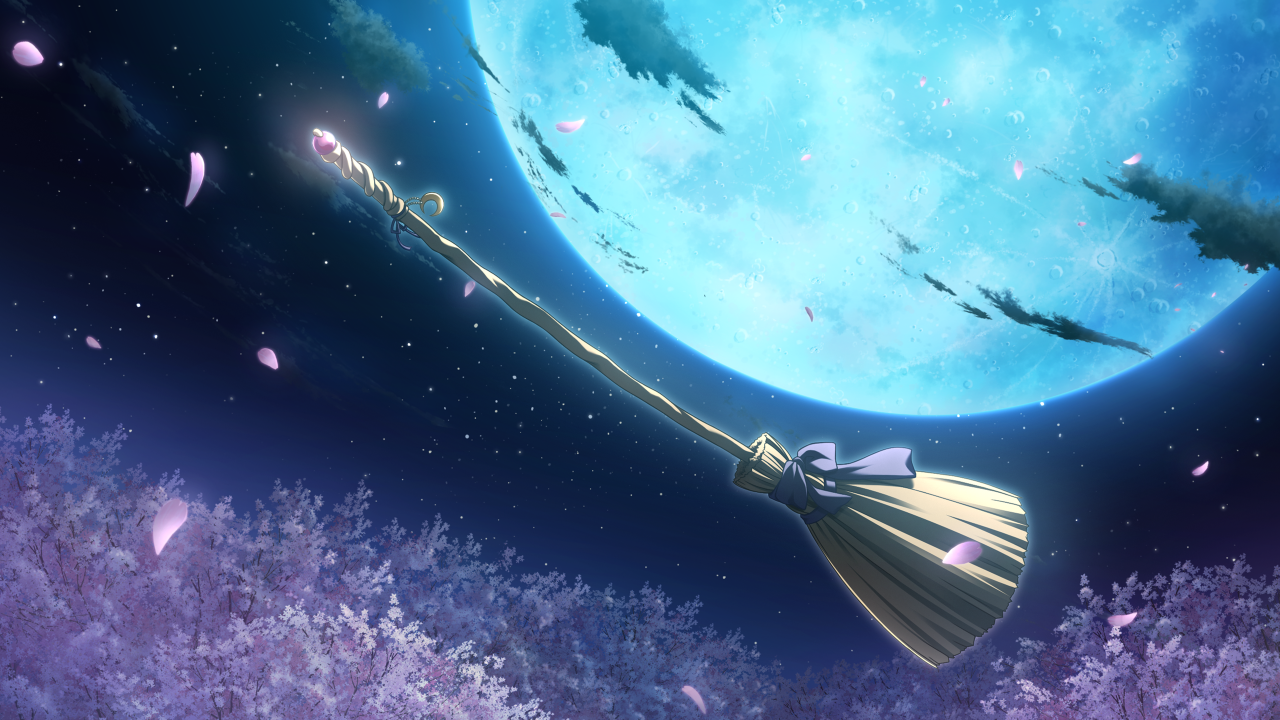 “Not the largest pole I… haven’t… had between my legs…?”

As for why the Chapter similarities were done like this… I am honestly not very sure. It might have something to do with the fact that Chapter 1 and 2 were bundled together in Japan, so their stories were always meant to be very intrinsically linked together. Oooh, mysterious…! I have some other theories of my own, but hey, that would really be spoiler territory, and I just promised Uncle Nurio does not do spoilers! So no theories for you!

Hey, you can start reading from here again if you tried to avoid spoilers!

There are many things I like about Supipara, and even though I already really liked Chapter 1, I didn’t even realize how much I truly loved the game until I played Chapter 2. I genuinely missed the characters, the settings, and as aforementioned, the music. I guess absence does make the heart grow fonder…

Supipara just has this level of polish and atmosphere that I don’t see in a lot of other VNs. Heck, I mentioned in my Chapter 1 TC that it’s hard to tell what is CG and what is just sprites on backgrounds, but there are other things, like voice lines actually playing ‘in 3D’. If a character is to your left, you’ll hear the voice coming from the left speaker, or if they’re far away, you’ll also hear the voice from far away. They have such an attention to detail that it becomes a truly immersive, magical experience that I would recommend to everyone.

Of course, when I say level of polish, I am ignoring those times when you see… artifacts of the beta version, like missing backgrounds being replaced by pure red… (Naturally, you won’t see these things in the finished version!) 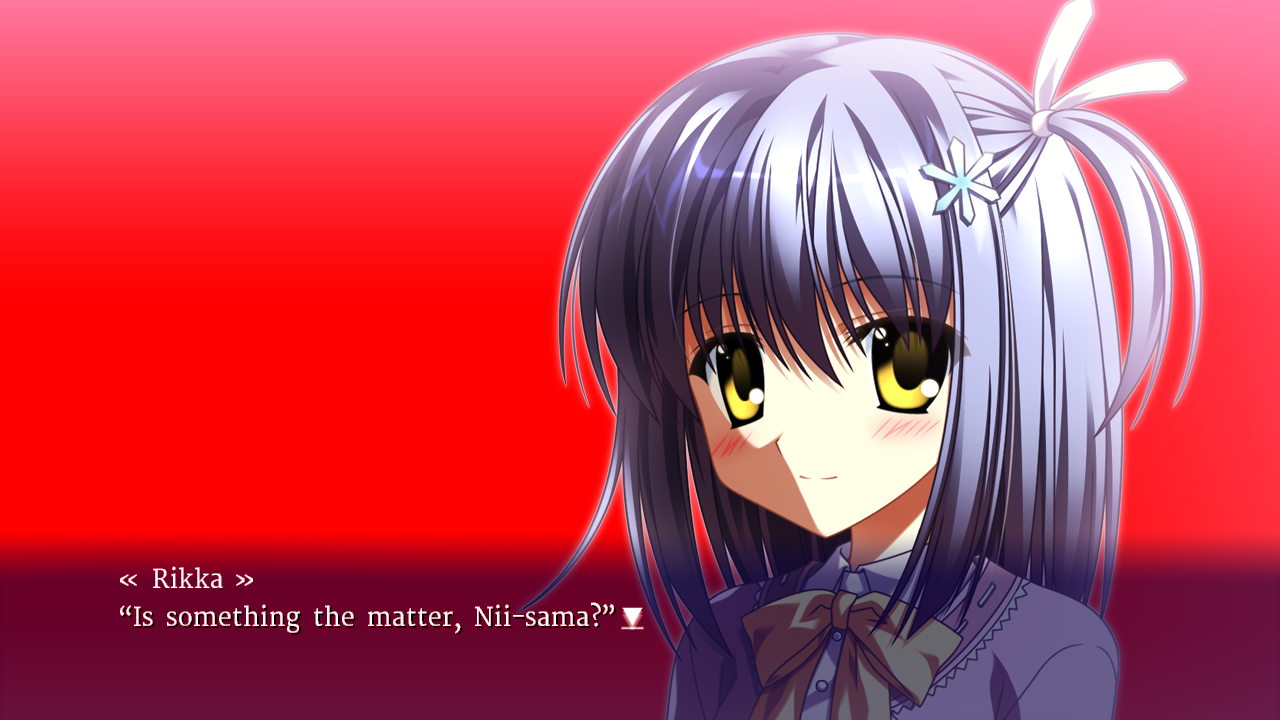 N-No. Nothing is the matter. It’s not like it looks like the sky is literally on fire…

Anyway, like I said, I can really recommend Supipara Chapter 2 to everyone who likes a story VN with focus on characters and atmosphere. But… maybe I’m also recommending it to everyone because I am trying to get Chapter 3 funded for a very particular reason. Can you guess what that reason is, hm?

Lastly, I wanted to say that since Supipara Chapter 1, I finally got a new computer! How is that relevant? Well, my old computer wasn’t that great and the cherry blossom animations kinda killed my computer’s performance. Now, with my new and improved computer, that shouldn’t happen! …Except, apparently it still does. New equipment doesn’t matter… RIP, me. 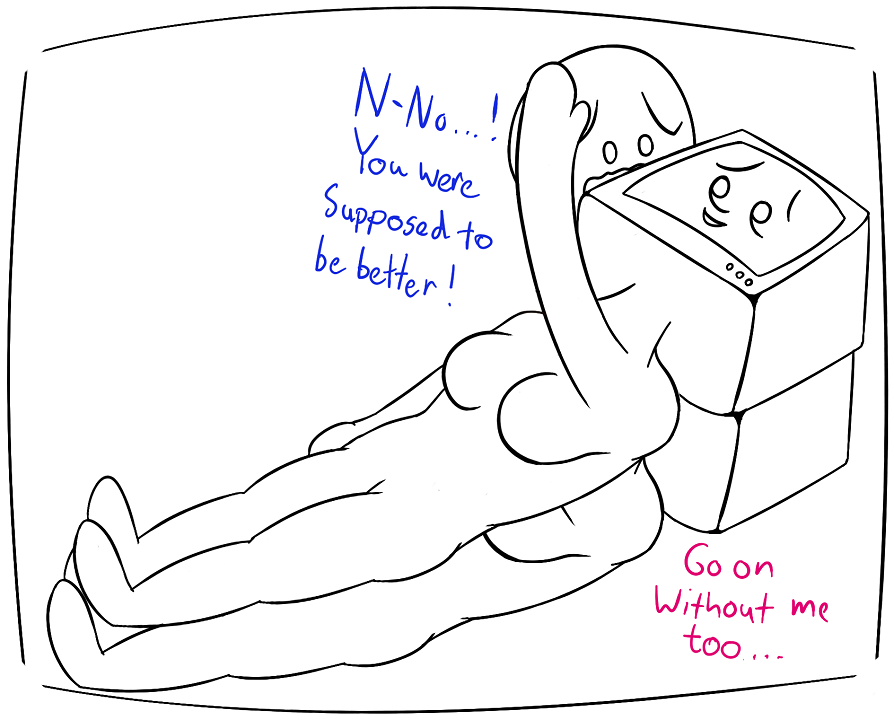 Sigh… Guess I’ll have to get an even better computer when Supipara Chapter 3 comes along… But for now: Nurio, out!