Welcome back to our series of intro posts for Rance 5D! Last time we introduced the Rance series and some of the characters appearing in Rance 5D. Things get a little weird today as we talk about the gameplay in 5D, as it’s a very weird game. Its manual has this to say about its gameplay style:

“This game has elements of RPG and adventure games, but it’s something quite different than most of them. This game has its own rules and special behaviors, so common sense for other games of this type may not always apply to it. Please approach it with an open mind and enjoy.

It’s a game with many random aspects, so it’s impossible to play perfectly. It’s made so that you can clear it even after bad luck and failures. We recommend enjoying your good fortune while you play, rather than getting irritated at every moment of bad luck. (Of course, the game cannot be cleared completely by luck. Your choices can raise or lower probabilities.) The game has been made so that every CG can be obtained in one playthrough (there is no branching, but some choices can lead to a game over). We think the difficulty is fairly average. We think you’ll get a few game overs and have to restart from a little ways before, but please think of clever strategies and clear the game.”

That’s right, the major mechanic in Rance 5D is luck. Let’s go over the general aspects of the game and discuss some of the ways you can affect your odds. 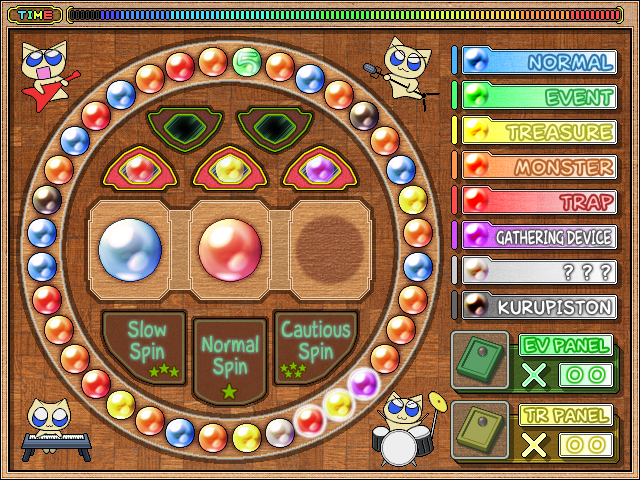 Movement through dungeons is done on this roulette, with the color of the orb you land on indicating what’s in store for the party next in the dungeon. There’s a time limit in each of 5D’s five chapters indicated by the bar on the top of the screen. Spinning the roulette normally will use up one unit of time. If you spin the roulette with “Slow” or “Cautious,” you’ll use more time but you can choose where you’d like to go after it stops.

The large orbs in the center are a record of your previous spins (but only if you spin normally).
If you get three in a row of the same color, something good will happen (probably).

A quick look at the different orbs and what they mean:
Green Orbs (Event): Important events. They start with 5 in each chapter, meaning there are five important events remaining. Aim for these to progress. If you use “Normal Spin,” the green orbs will increase in number, raising the probability of stopping on one. When the roulette stops on the 1 Event Orb, the chapter will end. Keep your remaining time in mind as you spin.

Blue Orbs (Normal): Something happens in these places, but what happens will depend on who takes action, so try out all sorts of things.

Orange Orbs (Monsters): You’ll encounter monsters. The monsters that show up aren’t random. There’s a set order to them.

Red Orbs (Traps): You’ll set off traps. Nothing good will ever happen here, so you’re better off avoiding them. Each chapter has its own set of traps, so if you have precautionary items for them, you’ll be all set.

As for the other orbs, some of them vary depending on the chapter you’re in, so you’ll have to figure them out on your own! My personal recommendation would be to go for the Kurupiston orbs as often as possible. 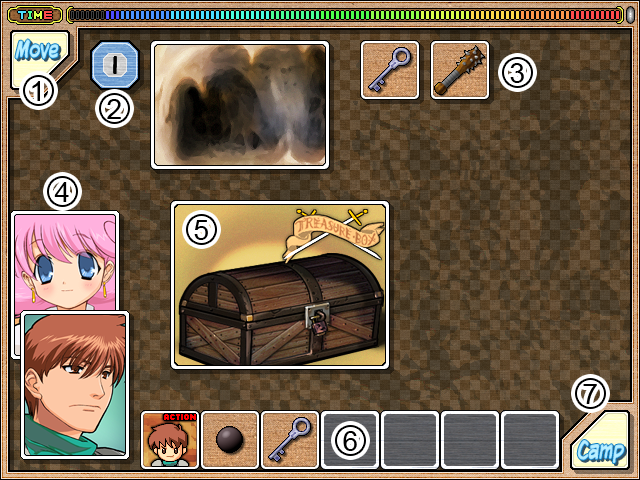 Most of the scenes in the game will take place on this adventure screen.

1. Movement Button
Use it to advance to the next scene. Cannot be used if there is an X mark over it.

2. Timer
Time ticks by on this icon with each action on the adventure screen. After five actions, one of the units in the time bar will be used up.

3. Items on the Ground
Click to pick them up. Some items are sold at shops, too.

4. Character Cards
Rance and his party members are displayed here. The frontmost character will be used when taking actions. In this example, it’s Rance, but you could make Sill the acting character by clicking her face CG.

5. Important Things
This card represents the important thing in the scene. Acting on these items (opening treasure chests, searching something) may require a success check.

6. Item Cards
These are Rance’s party’s items. Not every item is displayed, just ones that may be useful in each scene. Use them by dragging and dropping them on your target. The first entry isn’t an item, but a special action the acting character can use. 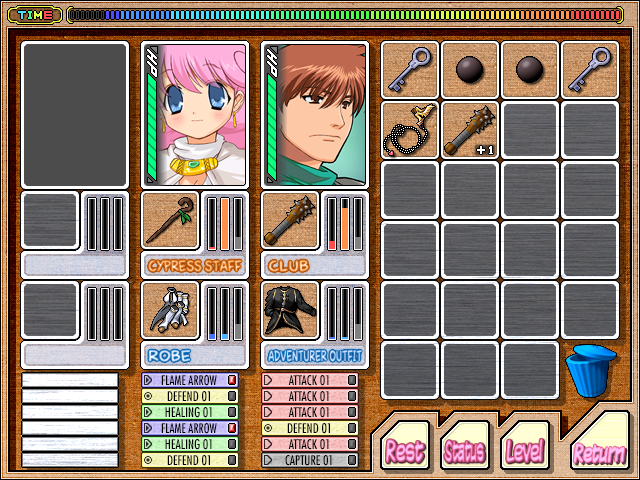 Rance’s party can complete various preparations on this screen.

Rest Button
Resting costs one section of time, but character health will recover by 1/3.

Status Button
Check the status of your characters. Here, you can view characters’ stats including the amount of EXP they need to level, choose which of their skill sets to hone, and see what their weak point is (for instance, Rance takes double damage from attacks with the “light” attribute).

Level Button
Summon Level Goddess (in training!) Mikan to level up the party.

Battle Party Formation
Your three person battle party is shown here (though at first it’s just Rance and Sill). You can rearrange their battle formation by clicking the characters’ face CGs.

Battle Action Formation
Each character has six battle actions that can be rearranged by clicking them (but they cannot be switched with other characters’ battle actions).

Using Items
Use items by dragging and dropping them onto characters’ face CGs. If it’s an item that can be equipped by that character, it will switch places with what they have currently equipped. If the item is a character, that character will be added to the battle formation. Place items in the trash can to discard them.

The Level Up Screen 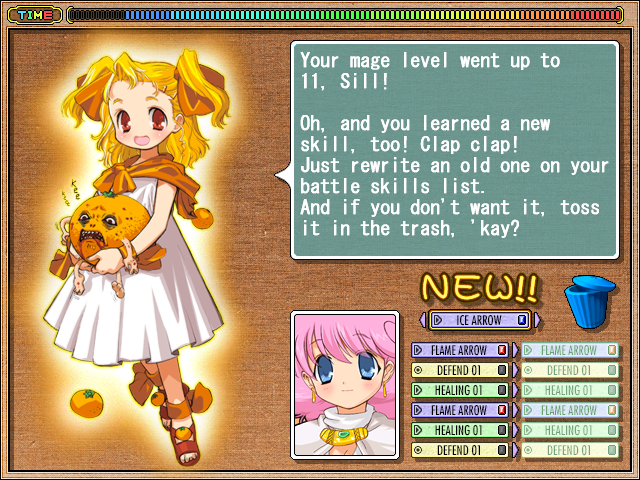 You can summon the level god and level up as soon as you have enough experience. Everyone in the current battle party will level up, though only in the skill set that they currently have selected. Sometimes when characters level up they’ll gain new battle skills. These new skills can be switched with one of their current six by clicking one of them. If you’d rather not replace an existing skill, click the trash can.

Battle skills can also be upgraded to stronger skills by combining identical skills. If Sill already knows Flame Arrow and obtains a new Flame Arrow skill, combining them will allow her to learn Fire Blast.

Only humans can level up.

Well, that’s probably enough for now! Next time we’ll go into Rance 5D’s (you guessed it) unique battle system and explain some more details about actions, items, and traps.

But before we go, more trivia, on monsters this time!

Rance Juicy Info #5:
Gal Monsters: There are both guy monsters and gal monsters in this world. They may look like humans, but they are indeed monsters. They’re born through monster-monster breeding. Even beautiful frozens sometimes copulate with squidmen… Tohohoho.

Rance Juicy Info #6:
Capture Ropes: A specialized tool for hunting gal monsters. They can only be used when the monster is weakened, but they will capture her without further harm. Hunters make a living by capturing these monsters and selling them to enthusiasts.

Rance Juicy Info #7:
Lucky Can Can: The luckiest gal monster in the world. In fact, they’re too lucky, so if you defeat one, you’ll get oodles of experience. They live proactively, always trying to find the positives in any situation. It’s important to have a fortunate outlook if you want to live fortunately, isn’t it?

Rance Juicy Info #8:
Hannies: There are male and female hannies, as well as the Hanny King, ruler of the hannies (he does not appear in this game). The Hanny Flash attacks they release deal absolute damage to their targets. Also, magic does not affect them, so be careful when fighting them.