As always, we’ll be at Anime Expo again this year, and bringing some great companies with us! In this post we’ll be showcasing them all!

As we hinted at previously, we have three special guest companies coming to AX in addition to our usual lineup…and we think you’ll all be pleasantly surprised by who they are.

First ones we have to announce are the regulars attendees are probably already familiar with and expecting to see again!

I’m sure many of you reading this are already well aware of who Circus is, what with the Da Capo series and Suika being offered on our website already. But who will be coming with them this year? Well, that’s for another post. They’ve also made many games like Valkyrie Complex, Eternal Fantasy, and are currently working on new incarnations of both Da Capo and Suika. Last year, they brought the announcement of Da Capo 2 for the west, but what news will we be hearing from them this year?

This year we’ll also be seeing Nexton joining our booth once again! Now, some of you may be wondering who Nexton is, but perhaps if we list their brands you’ll understand better: BaseSon, Tactics, Score, Liquid, Portion, Nomad, Lusterise, and Galactica!

They’ve already worked with us to bring great games like Koihime Musou, Guilty, We Love Master, and many more to the west. Perhaps some of the other games in-progress from them will finally be unveiled at this year’s AX!

And of course, OVERDRIVE would never miss it either! With Edelweiss, Kira Kira, and their respective fan discs released, only two remain unavailable to the West: DEARDROPS, which we’re currently working on as we speak, and Dengeki Strykers, a game which hasn’t even been released in Japan yet. What exciting news could they be bringing us this year?

AKABEiSOFT was originally a doujin circle who published their own original and parody works, but in 2005, they became the company known as AKABEiSOFT2. Under this brand name, they’ve published many great titles such as Devil on a G-String, Sharin no Kuni Himawari no Shoujo, and World Love Organization. They also expanded into several other brands such as Shangri-La, known for Akatsuki no Goei,  Akatasuki Works, known for Rui ha Tomo wo Yobu, WHEEL, known for ~Pantsu wo Miseru Koto, Sore ga…~ Daiuchuu no Hokori, and even creating a sister brand Effordum, which brought out games like Concerto Note. Although they’ve blocked foreign IPs from viewing their websites, they’ll be coming out to meet fans from the West this year, so be sure to come show them that you’re interested! This may be the first step towards something more……

Debonosu Works is an eroge brand founded by Yamamoto Kazue after parting ways Studio e.go together with several other ex-e.go staff in March 2009. As one of those who founded Studio e.go, she’s worked on the artwork for every studio e.go game from its inception in 1998-99, and the staff who left to join Debonosu with her have worked on nearly all of them as well. Now, as Debonosu, these fine people continue their proud tradition of creating eroge with extensive interactivity. 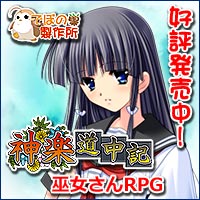 One of Debonosu’s representative works is Kagura Douchuuki, a Rogue-like RPG/Visual Novel featuring shrine maidens. In this game, much like in Diablo, you control one of three shrine maidens, exploring randomly generated forests, caves, dungeons, and more filled with a vast array of monsters, items, treasure. As you venture into the depths of these dungeons and rescue the women captured by the spirits within, the local town will recover, flourish, and provide you with new aid, but should you lose, you’ll find yourself at the mercy of said monsters, and in need of treatment post-haste. As the village grows, so too will the number of available quests, and enticing rewards.

Founded in 2008, Clochette is known for making games with great characters, sweet romances, stunning visuals, and highly enjoyable H-scenes. Their latest release, Kamikaze Explorer, was just recently released in Japan, and boasts full artwork and animation in 720p HD and character sprites that move more fluidly than in most other games. You can view the HD Opening Movie below.

We hope you’ll join us in welcoming our visitors at AX!