It’s hard to believe it’s been this long, but the series is nearly in its ninth year…

We’re doing our best to continue bringing you works of yuri, so we appreciate all your continued support.

Also, when you spend all these years making 18+ yuri games, you become aware of certain day-to-day particulars as a yuri game producer. I’d like to take this opportunity to discuss some of those, if I may.

The Day-to-Day of Yuri Vol. 2: Artwork is a Surprising Headache!

Another thing I’ve realized while working on this long-running series is that the artwork for yuri games, compared to standard male/female romance games, is pretty challenging…

For starters, for event scenes, there’s a pretty good chance that two characters will have to be drawn. In male/female games, it’s not uncommon for sex scenes to display a lone female, but in 18+ yuri games, you pretty much always have two characters.

That alone means twice the effort has to go into the artwork… And for sex scenes involving two girls… the number of positions is extremely limited.

This is especially true when following the “no toys” rule mentioned previously.

All of this means that when the person in charge of the visuals for an 18+ yuri game is working on the art, there ends up being a lot of similar cuts… You know? It’s a surprising headache (*sweat*).

You Can’t Do Widescreen?!

This is something I’ll occasionally get emails about from the users, asking “Everyone has widescreen 16:9 displays these days, so why is A Kiss For The Petalsstill 4:3?”

No matter how you slice it, yuri games have a lot of event scenes of two girls getting cozy. This just doesn’t fit a 16:9 widescreen. You get way too much negative space on either side. 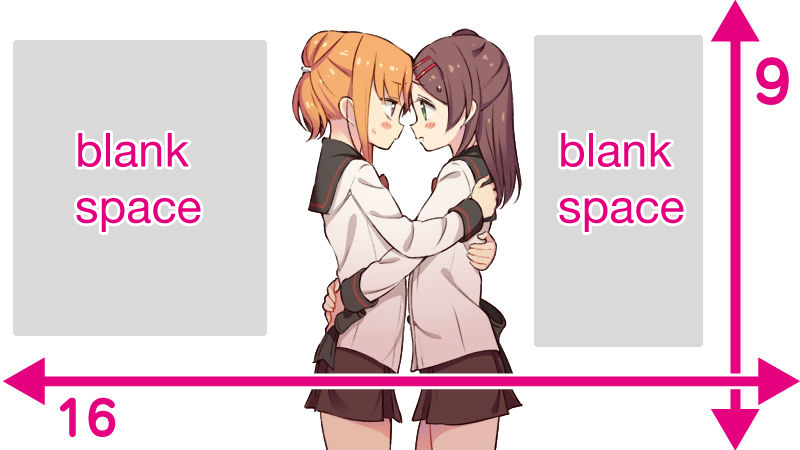 Widescreen would work fine if they were sprawled out on a bed, but for outdoor scenes, they’re usually going to be standing…

For optimal composition, you’d either have to have an ultra close up, or rotate the whole thing nearly 90 degrees. But if you do that, every image would end up having the same composition, and that would be really rough…

This is just my personal opinion, but when it comes to playing yuri games, I’d suggest rotating your computer monitor 90 degrees and playing it in the vertical orientation (lol).

One day there may be a “vertical yuri game” designed for smartphones. I’ll leave it to you to guess when that might happen (lol).

Well, we’re just about to that point for now…

Check back next week for another installment of the Day-to-Day of Yuri!