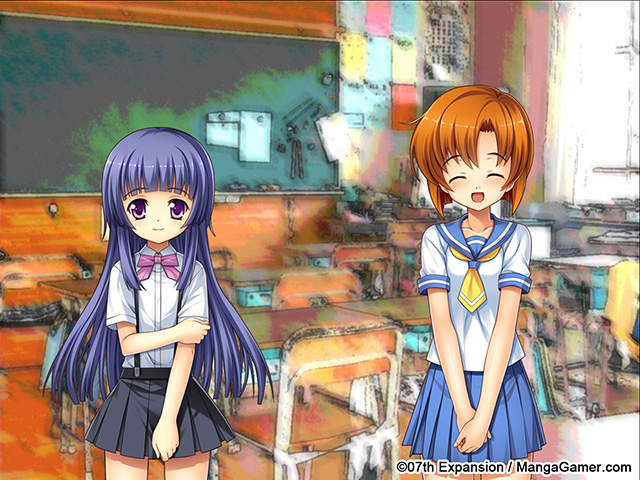 Today we have a few words to share from our translator for Higurashi no Naku Ni Hou: Onikakushi available this Friday on our website and Steam!

Japanese, as with any living language, is constantly changing and evolving. One of the things that happens along the way is the inevitable borrowing of words. Some foreign loan words, specifically those that are taken from English, are known as wasei eigo (和製英語).  Since these words are one-to-one analogues to English words, it’s tempting as a translator to simply transliterate these phrases, but a variety of different things happen that make that an awkward choice.

Oftentimes, separate English words are combined into one phrase, mostly because they ‘sound nice’ to the Japanese ear. In Higurashi for example, the word 「キーホルダー/key holder」 pops up. Separately, the words make sense: ‘Key’ and ‘Holder’, and it gives you a good idea of what it is, but the phrase ‘key holder’ seems awkward to a native English speaker, who would know this item as a ‘key chain’. Similarly, the Japanese word for prime time television is 「ゴールデンタイム/Golden Time」.

Other times, while the word isn’t wrong per se, it can seem rather archaic or uncommon in English. For example, the car horn in chapter 14 of Onikakushi is referred to as a 「クラクション/klaxon」.

The Japanese also have a penchant for shortening words to the point that they become nearly unrecognizable from their English origins. Two of the most egregious examples of this are ‘sexual harassment’ → 「セクハラ/sekuhara」 which is used to describe Mion a lot, and ’platform’ (as in a train platform) → 「ホーム/hōmu」.

In general though, the most insidious cases for translators to deal with are when the respective words begin to diverge subtly in meaning in their respective languages. While not in Higurashi, a prime example is (and pardon my french): bitch (ビッチ). While the English word generally has the meaning of an unpleasant or rude woman, the Japanese word has a more sexualized meaning, used to indicate the person is a ‘slut’. While both words remain derogatory, the shift in meaning can make a translation slightly off from the intended meaning.

To finish things off on a lighter note, my personal favorite bit of convoluted wasei eigo trivia: the tale of the Japanese word for stapler.

Much like how many company names or trademarked products such as Q-tips, Kleenex, Popsicle 「アイスキャンデー/Ice Candy」, and Sharpies became generic words for similar products in English, the Japanese word for stapler took it’s name from the E. H. Hotchkiss Company, and became a Hotchkiss （ホチキス）. However,  you’ll find that most English speakers have no idea what a Hotchkiss is despite it being an ‘English’ word, mostly because E.H. Hotchkiss went out of business in 1957!