One of the best and worst things about the internet is that if you post the phrase, “Let’s get some yuri artwork in here,” you’ll get a flood of images.

However, if you ask a hardcore yuri fan, more often than not they’ll ask, “Are those drawings really yuri?”

In extreme cases, the sentiment, “As long as there are two girls on screen hugging or holding hands, it’s yuri,” is not unheard of (lol).

But, that said, if you look into the source of those images… you’ll find they’re not yuri at all, but from something with a male protagonist and a harem of girls.

One way to distinguish them is to ask, “Where are the heroines looking?”  In other words… if the embracing girls’ lines of sight are directed at the camera, it’s a harem game.  If they’re looking at each other, it’s yuri.  …Makes sense, right?

The reason I mention this is that for hardcore yuri fans, yuri games where the girls make eye contact with the camera are thoroughly unsettling.

We want to see them looking intently at one another.  As if they’re saying, “I only have eyes for you!” 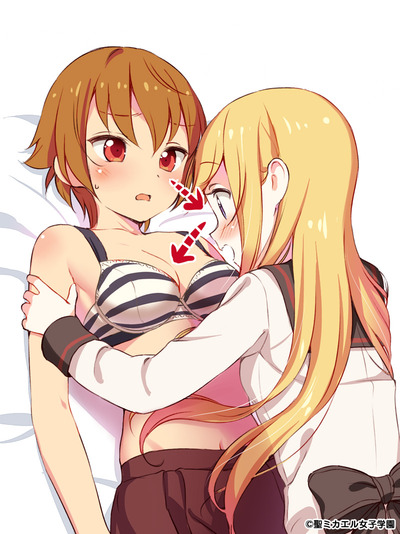 That being said… when the heroines have been looking at different parts of one another, until their eyes finally make contact… that sort of situation has its own special cathartic effect… Can you tell that yuri is a topic of great interest to me?  (lol).

Check back tomorrow for another installment of The Day-to-Day of Yuri! And don’t forget, A Kiss For The Petals: Remembering How We Met goes on sale Friday!