Today, we have a tester’s corner for Da Capo III R from Puffketeer!

Hello once again. I am puffketeer, bringing to you my third, and most challenging, Tester’s Corner to write thus far, as this one concerns the latest main entry in a genuine juggernaut of a franchise, spun out of a visual novel into multiple crossover forms of media, including, naturally, multiple animated series. I am, of course, referring to Circus’ now running on 15-year saga of time, magic, and cherry blossoms – Da Capo. You’re my magician
I tell you everything, you make it everything
Lime – “You’re My Magician”

Where to begin with such an iconic series? Well, of course, two main entries in the series have preceded this title, Da Capo III R, which, it must be noted, is not the originally released version of Da Capo III, but rather a heavily rigged version with a great deal of bonus side stories added, including one centred on the cast of Da Capo II which can arguably be called a “reunion special” of sorts. In addition, the X-Rated version adds explicit sexual content as well; both these versions were released in 2013 in Japan, one year after the original version (which notably lacked the sexual content of the X-Rated edition), and these are the versions we have toiled over a long, long period of over 3½ years to bring to you in English for Windows, macOS and Linux. We are just as stoked to finally be bringing this title out as we hope you are to finally be able to play it. 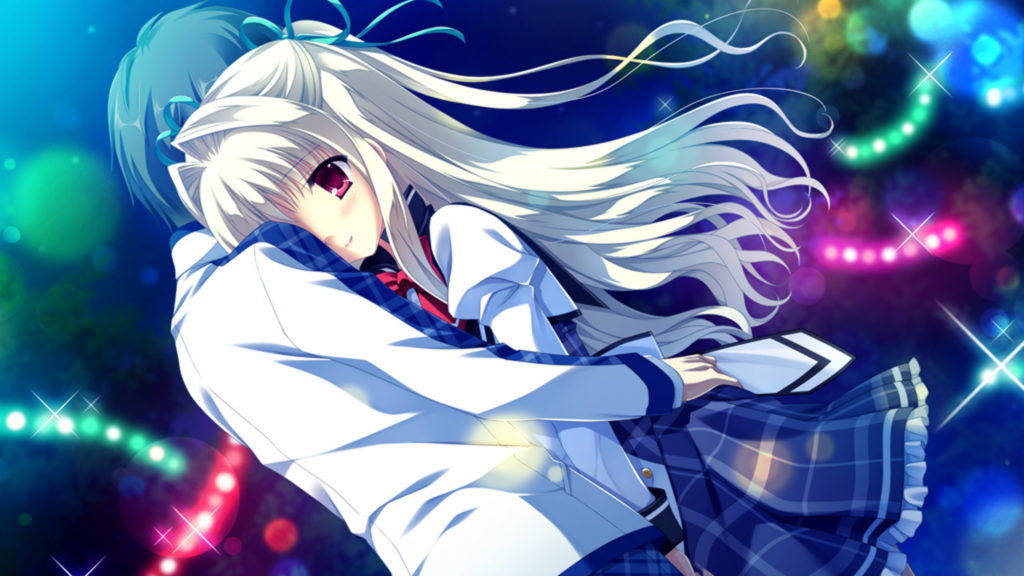 I’m wishing on the stars for Christmas, and hoping for a better day
When it doesn’t hurt to feel this way
Hurts – “All I Want for Christmas is New Year’s Day”

Da Capo has enjoyed a healthy history of success on consoles in Japan in addition to PC, with all three main titles to date receiving all-ages ports for PS2 & PSP. There’s even been an otome-themed spinoff title, Da Capo Girl’s Symphony, which was originally released in 2008 for Windows & 2010 for PSP. Naturally, the main games have all received anime adaptations as well, further cementing its status as a genuine crossover hit among eroge. With all the releases and re-releases of each main game to date, not to mention the many, many fandiscs & side stories released, let alone the crossover titles Circus has released which gather together characters not just from Da Capo, but from other major titles released by the company as well, calling this a “juggernaut” of a franchise, as I did in my opening, is certainly no understatement.

Da Capo III is an especially notable entry in the series, however, as it serves to link the overarching story line of the first two titles together while tying up remaining loose ends, and particularly memorably, forgoes the tried-and-true Japanese high school setting for much of its length, instead choosing to showcase much of the story in early 1950s London. Yes, that London. True to the era, where evening fogs were quite common in the city, fog plays quite an important role in the story and overall atmosphere, but you’ll have to play the full game to understand why. In any case, the story line is self-contained enough that it can be easily enjoyed even without prior knowledge of the previous two games, though knowing the lore from them definitely helps in certain ways. More on that in a minute. 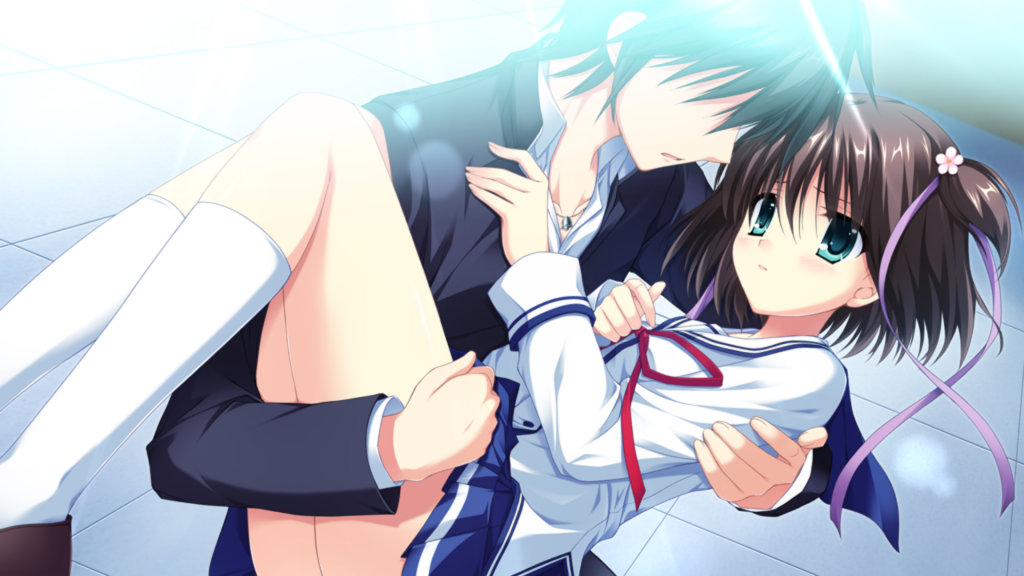 You’ve got me where it hurts, but I don’t really care
Cos I know I’m OK whenever you are there
New Order – “Tutti Frutti”

One other particularly notable aspect of the Da Capo series is its adeptness at melding explicit sexual content with a compelling storyline & quirky characters. While not shying away from displaying the graphic details, the sex scenes in DC3R are presented with a tone of profound tenderness, not just showing “sex” on its own, but rather, two people expressing their mutual love for each other in a physical manner. The myriad of emotions which accompany such an experience are on full display: bashfulness, ecstasy, yearning, unity, but above all, the joy of loving another person. Da Capo, as a series, arguably has some of the sweetest scenes of vanilla boy/girl sexual content in the entire medium of VNs, and is also one of the most accomplished at weaving this content into the story without bogging it down. While not absolutely integral to the story’s experience, as evidenced by the series’ crossover success in all-ages editions, it can be argued that the sexual content adds an additional dimension to the characterizations & relationships built between our protagonist, Kiyotaka, and the main heroines, though I will let you, the player, be the judge of that. 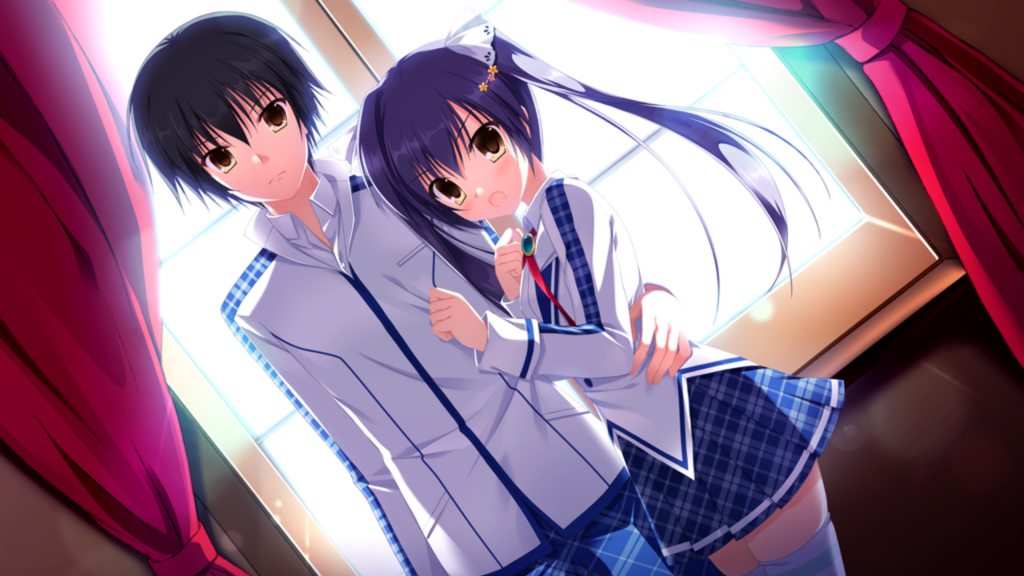 Now, returning to the question of how this title fits in with the first two Da Capo titles. The main storyline certainly has its connections to previous chapters in the long saga of Hatsune Island, especially given Sakura’s status as a character of particular importance in the story. However, the connections do not end there, especially for fans of Da Capo II. Everyone’s favorite banana-loving emotional android, Minatsu, makes a cameo appearance early on, having now become the head of her own detective agency, and as mentioned before, there is also a bonus side story, Ultimate Battle in the Cherry Blossom Breeze, which revolves around the cast of that game throwing a heavily nostalgic welcome-home party for Sakura upon her return to the era of that game’s events. Indeed, everyone from Anzu to Erika to Wataru has time to shine here. And of course, you’ll get to see more of Otome being overtly affectionate towards her beloved “Otouto-kun” as well. That said, however, DC2’s most recent and final fandisc, 2015’s Dearest Marriage, is much more of a last hurrah for that game’s cast than this side story is; rather, the focus here is on tying up the overarching story of the entire series, and tying up things for Sakura as well. Still, out of all the side stories included in DC3R, Cherry Blossom Breeze remains the standout. Where does love come from
When you’ve sold your reasoning out?
Talk Talk – “Give It Up”

This is, of course, not to say that the other side stories included do not add anything of note to the experience. While three side stories for characters within the story are included as well, the one other story of particular note, Ultimate Battle of Their First Encounter, focuses on Kiyotaka and Himeno’s first arrival in London, and their initial days as students at the Weather Vane academy, including their first meeting with Ricca (as the title implies). The main story in London is set some time after their initial arrival, and the prologue of the main story actually shows small portions of this side story as brief dream sequences between scenes, so it serves as quite a welcome expansion. Da Capo has always had a knack for fleshing out its characters & settings with side story after side story, though it can be argued that such side stories are mostly written with fanservice in mind. Still, given DC3R’s already remarkable length, the additional side stories serve to give the game even more staying power. A really good visual novel is one where you can lose yourself in the characters & setting, and DC3R is quite a strong contender for that label indeed. This title has, of course, been a long time in the works for localization, and in fact, it has been so long that two fandiscs have been released during the interim in Japan (Platinum Partner in 2014, and With You in 2016). Whether or not the possibility of seeing these, let alone the many other fandiscs associated with this franchise, in English will come to light rests in your hands now. As mentioned earlier, Da Capo III is self-contained enough that it makes for a good introduction to the series, even to those who may be unfamiliar with the previous titles, and given how much anticipation has surrounded this game’s English license, we are hopeful that with this, and the upcoming English release of the series’ spiritual successor, Dal Segno, we can bring further tales from this iconic series of time, magic and cherry blossoms to English-speaking audiences.

Like the da capo of a song, back to the beginning.

P.S. While there is, regrettably, no Mikoto route in DC3R (as she is quite gleeful to point out in one fourth-wall breaking scene), the With You fandisc contains one, so for those of you who wish for the ability to read her route in English, supporting this release is highly recommended.