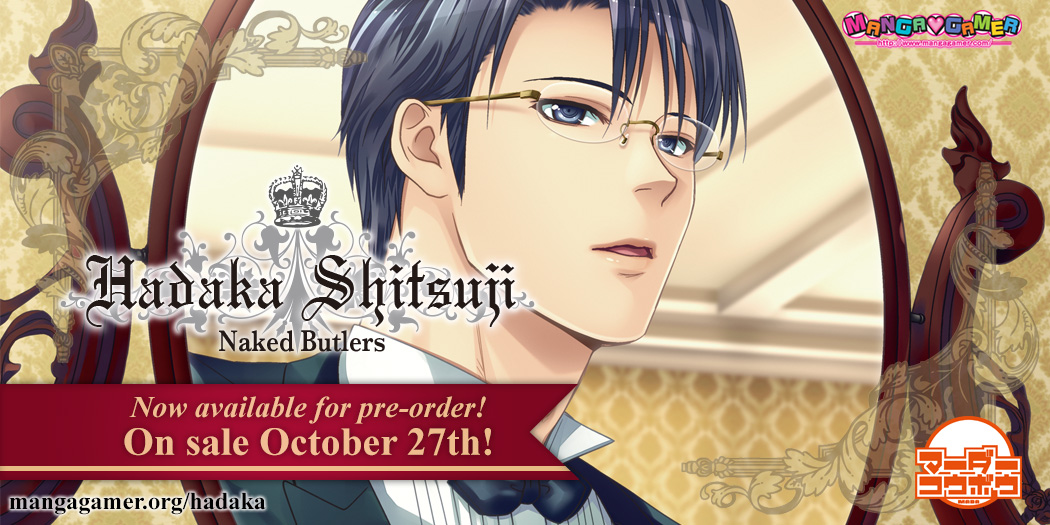 You may have seen the memes and heard the over-the-top reactions before, but just what is Hadaka Shitsuji really? Well, for one it’s a visual novel which will finally be available officially in English in a little over a week and you can pre-order it right now. So go do that and come back!

Done? Good! Alright, I guess it might be appropriate to start off with some history, Hadaka Shitsuji began it’s “life” as a game concept doujinshi in released at Comiket by creator Mito Togo in the summer of 2008 and it wasn’t until three years later in September of 2011 that the game was finally released. The BL game landscape looked pretty different back in 2008 when Hadaka Shitsuji was initially conceived than it does now. 2008 marked something of a downturn in this sector of the VN industry, only about three developers by my count that were active in that year are still producing BL games now, and it was also basically the last year we saw all ages console re-releases of 18+ BL titles until fairly recently. 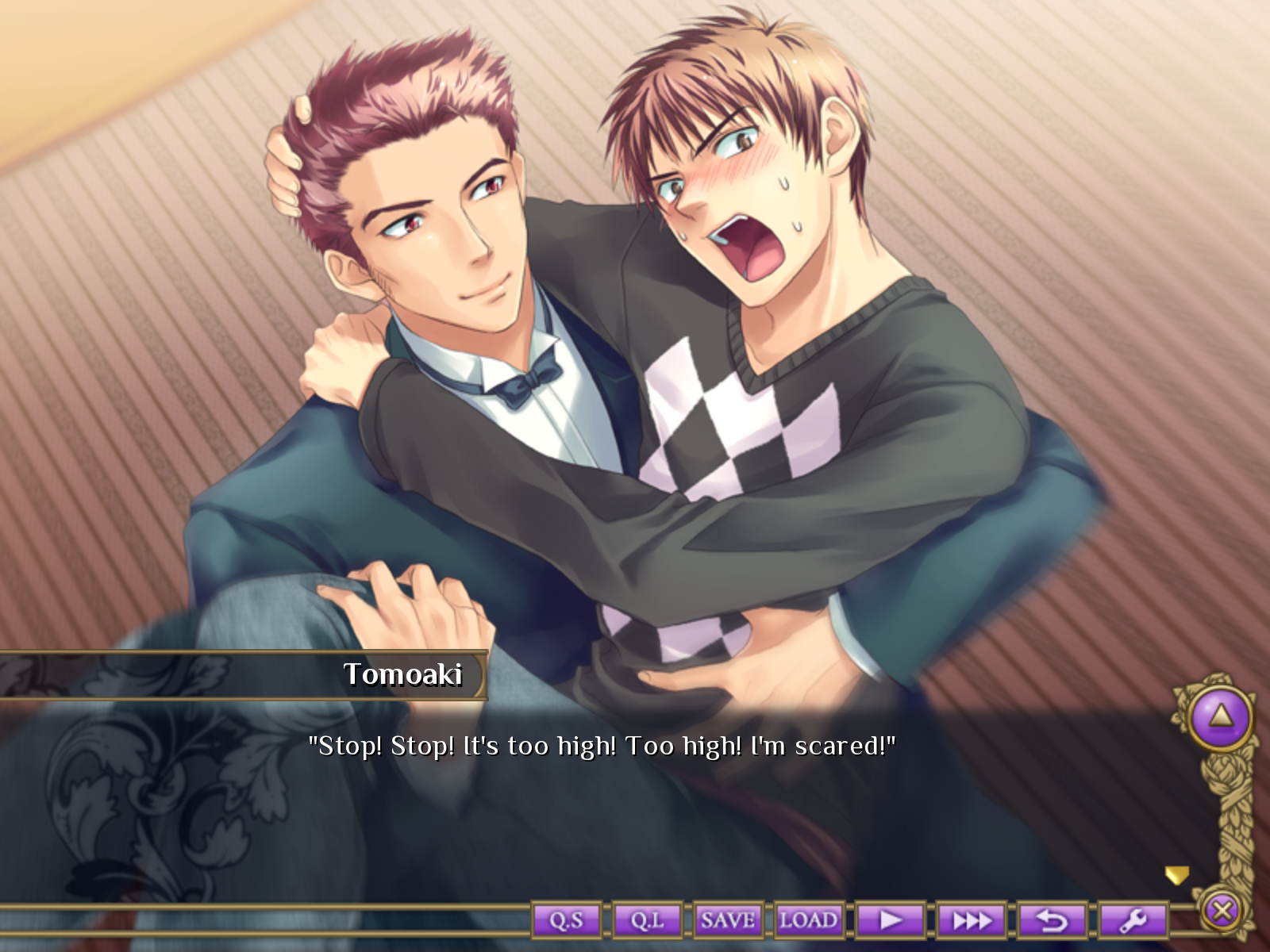 Even just as a concept Hadaka Shitsuji was pretty out there compared to the BL games that had come before it. The closest points of comparison I can think of are Spray’s Kichiku Megane (2007) and Pil/Slash’s debut title Masquerade (2006) which both featured switching mechanics of some sort and, particularly in the case of the latter, a bit more “kinky” sexual content, but to the best of my knowledge Hadaka Shitsuji was the first commercial BL game release to feature an exclusively seme protagonist despite the overwhelming market preference appearing to be quite the opposite. 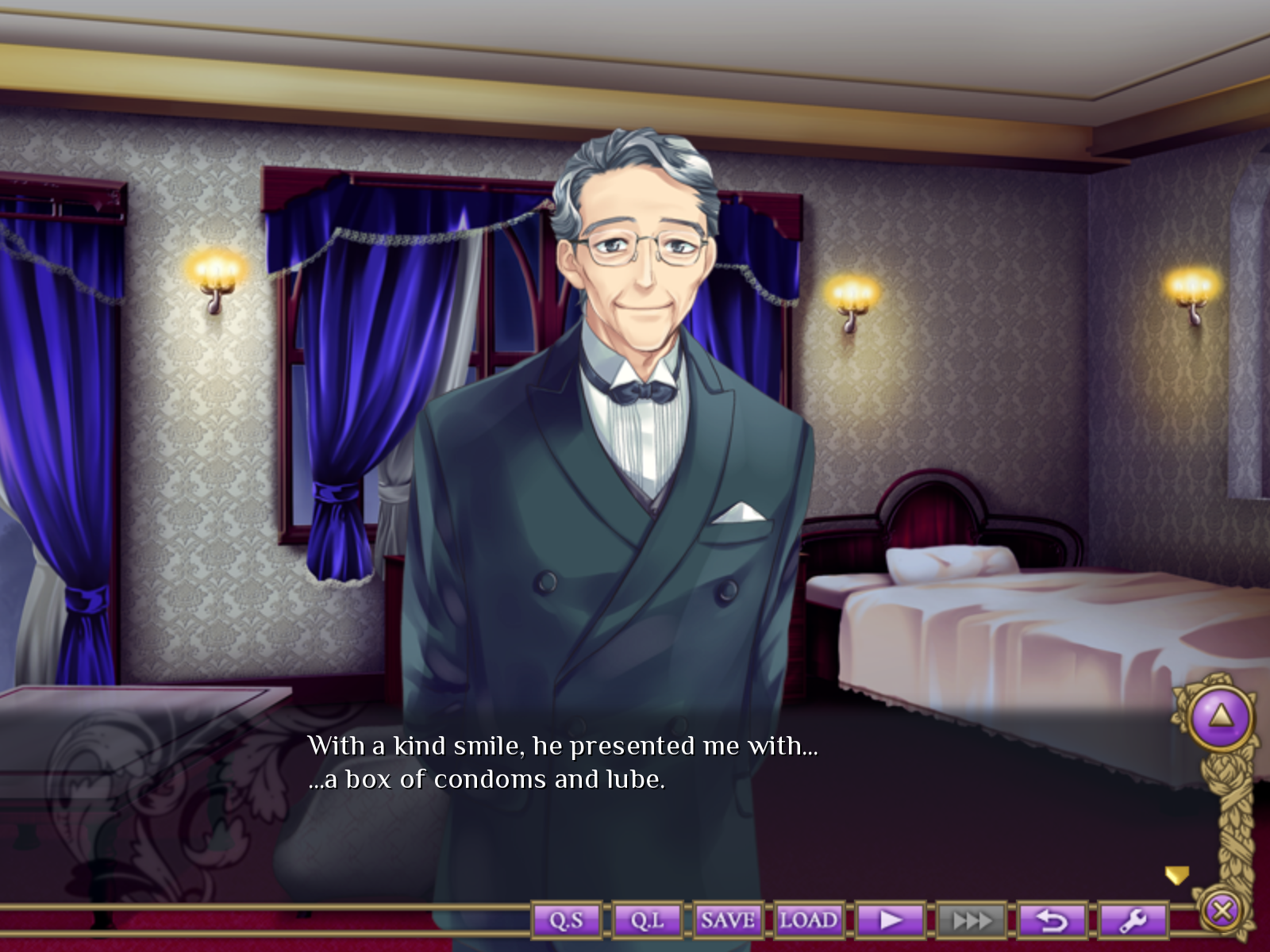 It took over three years for Hadaka Shitsuji to go from loose concept to complete game. BL games tend to have comparatively long development cycles (compared to typical mainstream eroge) to begin with, so that in and of itself isn’t terribly unusual, but other aspects of development were far from it. Most notably, the game was produced almost single-handedly by creator Mito Togo. He designed the game, wrote the entire script, and drew it all himself. He even voice acted one of the side characters! That’s impressive enough on its own, but once you take into account the length (it’s about 40% longer than No, Thank You!!!) and complexity of the game mechanics, I’m honestly not sure how he did it. 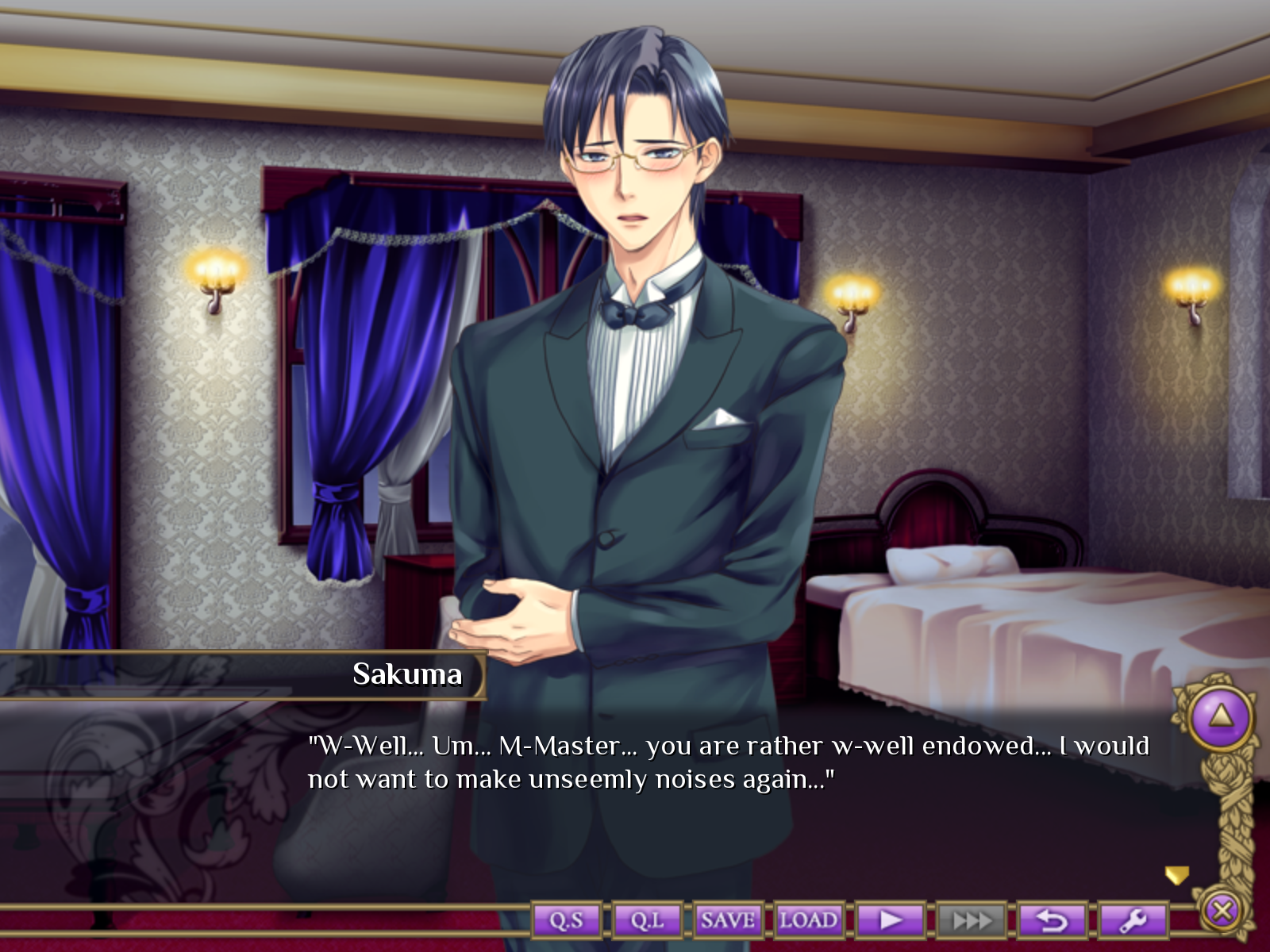 At any rate, I don’t mention the things that make Hadaka Shitsuji different to suggest these qualities make it inherently superior to other BL games or anything like that, but they do make it a bit unique, particularly in the context of where it fits in the broader picture of BL game history. Much of what makes Hadaka Shitsuji interesting is precisely the contrast between expectations based on established norms from games that came before it and the way it manages to turn a lot of those conventions on their head. I’m not sure it’d be nearly as noteworthy a game if it had been released this year rather than back in 2011 either, but then again the BL game landscape might look very different if Hadaka Shitsuji hadn’t been released back then. Just judging by trends in its wake, it always looked to me like, if nothing else Hadaka demonstrated that there was space in the market for less conventional BL titles (for example, almost half of the BL games released or in-development in 2017 feature seme protagonists). Admittedly, BL manga has been undergoing a fairly similar transformation over the last few years, so perhaps it was more a case of right-place-right-time than anything. 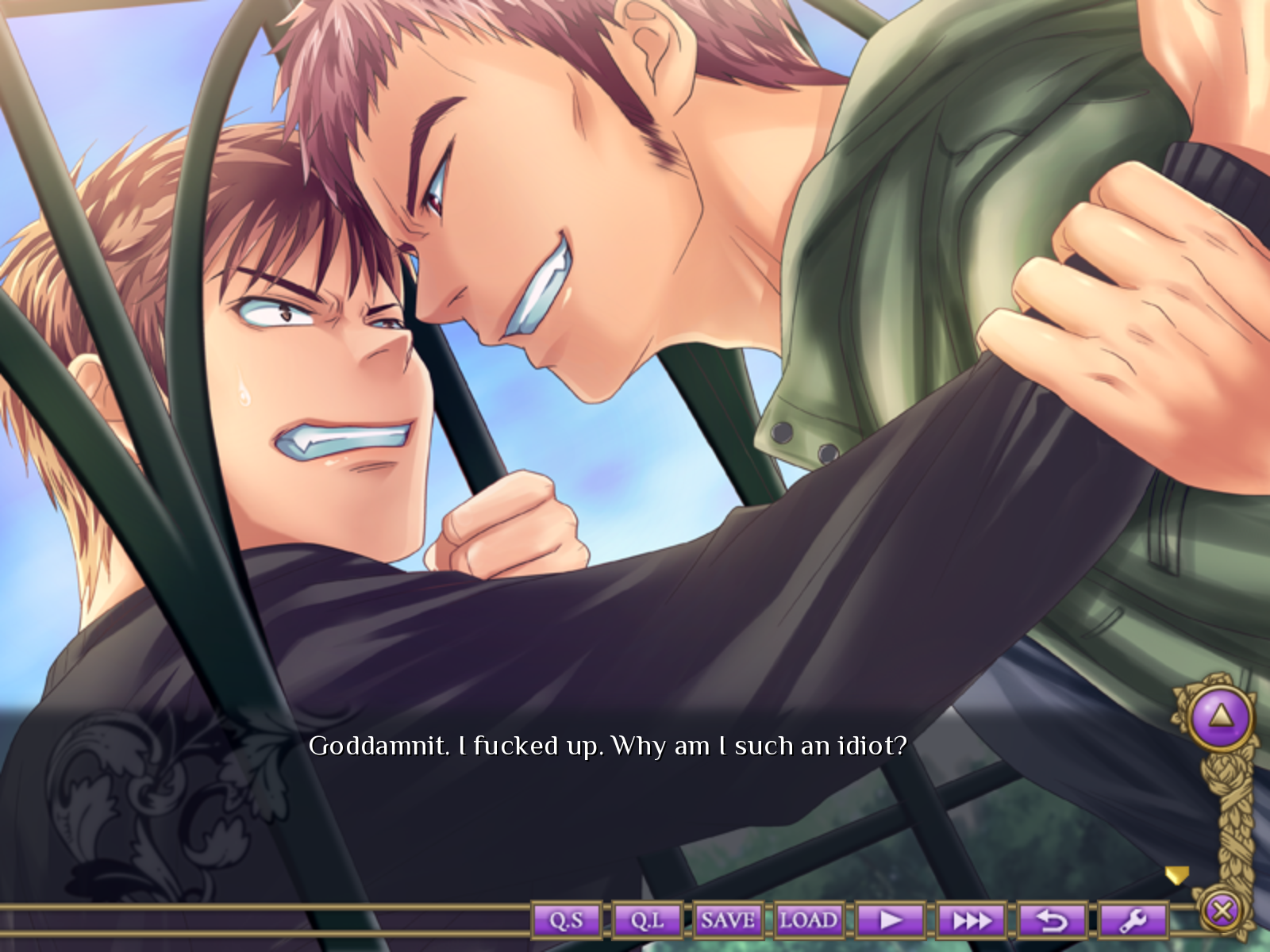 Of course I realize I haven’t said a whole lot about what the game actually is in it’s own right yet. The short version is that it’s an irreverent black comedy playing off established BL tropes. It fully embraces over-the-top porn logic in a way that you don’t often see outside games targeted at straight men and in many ways it feels a lot like a typical nukige (with an unusually fleshed out protagonist that is) as an unabashed sex fantasy. It’s a game about indulging in dark impulses and absolute power––and that’s not a fantasy most media’s willing to give people who don’t fall into the straight dude category. In that same vein it’s absolutely not a game for everyone: it has quite a bit of content many people may find unsettling or upsetting and isn’t exactly serious in tone. 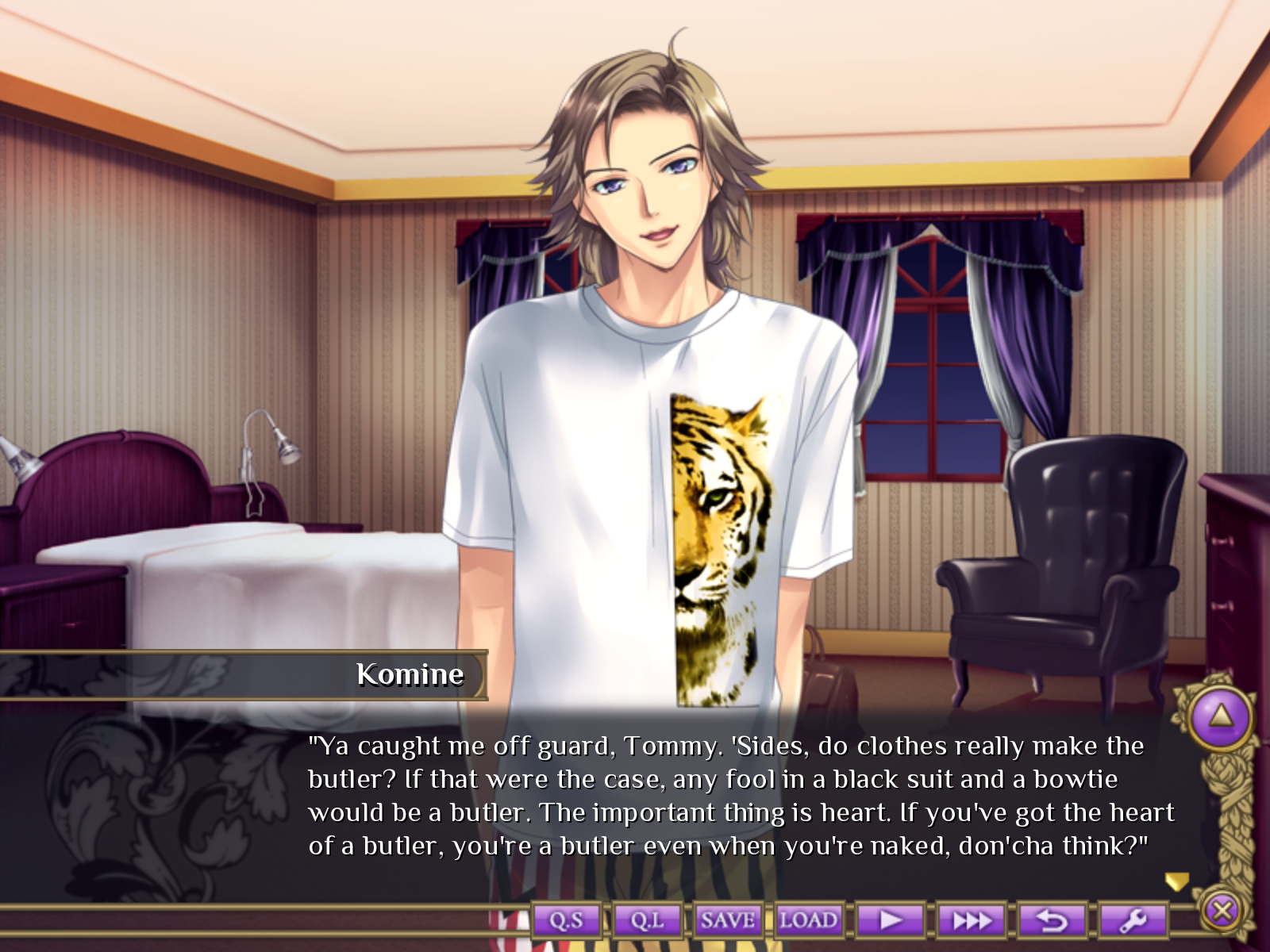 The game does also actually have a plot despite how it might sound! It’s fairly simple, the execution’s where it really shines. It’s nicely foreshadowed, and little clues and pieces of backstories all fit together neatly in the end. I imagine most people will be able to guess where it’s headed pretty easily, but you won’t have the full picture until you finish, I assure you––you won’t want to miss the bonus chapter that unlocks after you finish the true route!

On that note, I hope you’ll check out the game when it comes out next week!