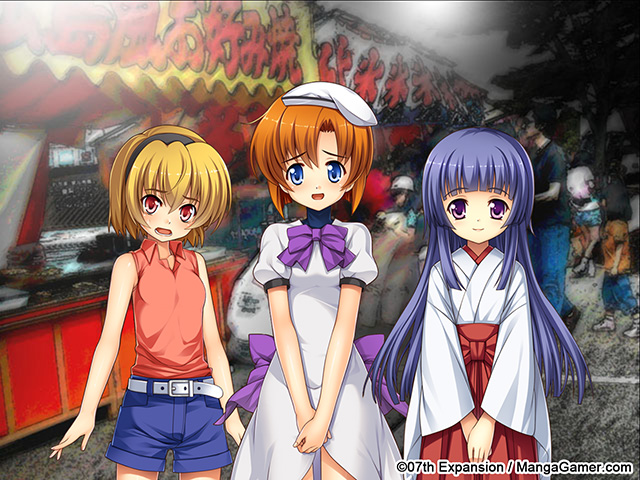 I cannot begin to explain how excited I was when I heard the next title I would get to sink my teeth into was Higurashi. Years ago, it was my obsession, my “curse” you might even say. Puns and jokes aside, I was very much stoked to get my hands on the 07th Expansion visual novel that started it all: a franchise of anime, shorts, OVAs, among others. That is, until I started playing the actual game. I feel the need to be clear that I did not dislike the game in its entirety because that would be a lie, but compared to other titles you could spend your money on, this one is not as well put together.

To start, yes sprites appear on screen as they talk, but if they are already on screen it is hard to know who is talking, if you can figure it out at all. This is frightfully frustrating for the player/beta tester because it could take a long time to get through a single line of dialogue, and by the end you still probably managed to misinterpret it in some way, shape or form because the dialogue literally takes up the entire screen, not lighting up a single sprite. The most you can pray for is a change in facial reaction. This is indeed a shame because one of Higurashi’s greatest strengths is its characters, specifically their motives, little charms, and (in some cases) insanity. It would have been nice for that to of been a little clearer. Though, this was really the biggest issue I had. The only other problem was an aesthetic one on my end with constant use of elongated ellipses or sudden exclamation marks where they simply did not seem to belong or just made the game seem not very well made, despite this being a reboot of an older game.

Once the above issues were put to bed, I loved everything else. The sudden changes in music from cheery, fun numbers to somber or dang near frightening trebles made me jump more than once. The improved art also added to the atmosphere, the dead eyes of some of the girls made my skin crawl more than once. This was the Higurashi I signed up for and as a beta tester and visual novel player I was very satisfied.

Higurashi is not a game for everyone, obviously, but if you like a good tale of horror mixed with some wonderful play on the human psyche there is no further place you have to look. I would recommend this to others, but I would be hesitant to put it in the hands of newbies or people who have a hard time following a visual novel that does not follow a standard format that clearly defines who is speaking. However, for veterans, they could adjust in time and enjoy the game for what it is there for: a slip and slide into the countryside world of Hinamizawa and all the secrets it chooses to hold.