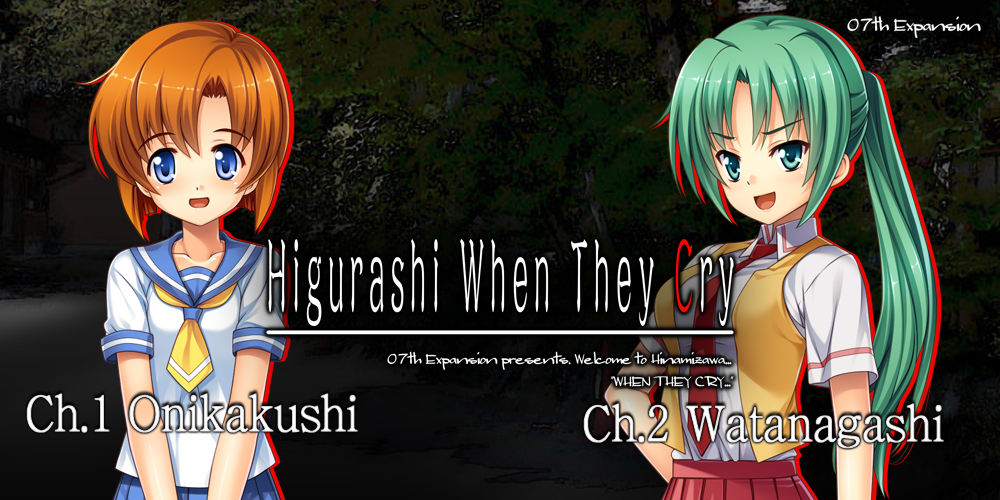 For today’s installment of the Twelve Days of Visual Novels we celebrate Higurashi Hou with some words from editor, Tyabann (please note this post may contain some mild spoilers through Watanagashi):

Unlike some of my coworkers, I only started watching anime in my last year of high school. This was, in retrospect, probably one of the better decisions I’ve made in my life. One of the first shows I watched, and one that was particularly popular with my peers at the time, was the anime adaptation of Higurashi no Naku Koro ni. At the time, I greatly enjoyed it despite the nonending and, again at the time, it set my standards for anime for some years to come. Of course, after I played the game I realized that the adaptation was, in fact, terrible.

One of the earliest narrative tricks that Watanagashi (Higurashi’s second chapter, for those not in ‘the know’) plays involves the character of ‘Shion’, Mion Sonozaki’s supposed younger twin sister. While both the reader and Keiichi are lead to assume that Shion is merely an identity that the tomboy Mion takes on when she “wants to act more feminine”, it’s eventually revealed that Shion is indeed a real person, and one far more mean-spirited than she initially seemed. In the game, this comes at the end of a buildup of over five thousand lines and five days of time, during which it appeared as though the game was leading up to some kind of an actual, if stereotypical romance. This gives the twist quite a significant impact; however, in the anime, all of that is just the first, 20-minute episode of the arc.

Don’t get me wrong, I understand very well the perils of adaptation and the need for significant cuts (and this is hardly the Higurashi anime’s greatest omission) but what’s important about this scene for later in the chapter, as well as later arcs, is the idea of ‘Shion’ and ‘Mion’  as not names for individuals, but names for specific identities, a notion that will likely stick with the reader for longer than just the first part of the game. Without this buildup, that notion isn’t cultivated nearly as well, and the impact of the reveal scene is lost. When I was playing through Watanagashi for the first time, this was the difference that struck me as the most major loss of the adaptation, and what really made me appreciate the game at all.

While the early sections of each Higurashi game get a lot of complaints due to their slowness and apparent irrelevancy (often resulting in demands to ‘hurry up with the murder already’) in my opinion the inevitable horror is enhanced by these early segments. Not only do they enhance the reader’s understanding of the characters, but each chapter goes to great lengths to establish a new status quo to in fairly quick (though not quick enough for some, clearly) succession to rip out and stomp on. In other words, slice-of-life scenes are very important to horror games like this, so please don’t knock them!

Nowhere is this more apparent than in the particularly-insane Tatarigoroshi, which I’m greatly enjoying working on as of this writing, and am really looking forward to helping release next year. In the meantime, Merry Christmas!

What have you thought about Higurashi so far? Let us know in the comments or using the hashtag #12daysofVNs! Check back tomorrow for our next installment of the 12 Days of Visual Novels! (And don’t forget about our winter sale either!)

Pick up Onikakushi or Watanagashi or any of our other major 2015 releases and earn triple MangaGamer points! 1 MG point = $0.01 that you can use to apply to future purchases (you can even pay for entire games in points!).