What Kind of Game is Beat Blades Haruka? 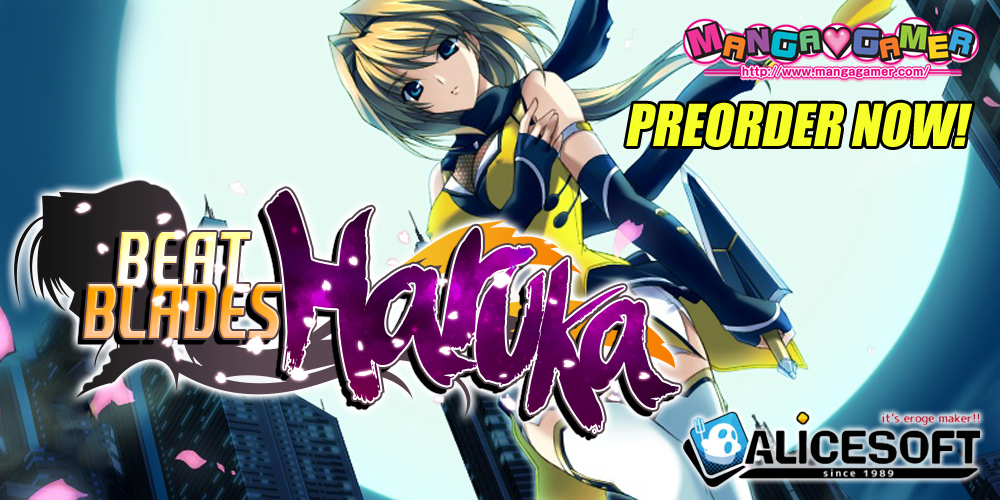 Hi, this is Beat Blades Haruka translator and professional Alicesoft fan guy Arunaru. Are you looking forward to Beat Blades Haruka? You should be, it’s pretty good, in my professional opinion. But I do think people aren’t entirely clear on what this game’s all about, exactly. Haruka being not so much a visual novel as a game proper, as Alicesoft titles tend to be, you don’t really get the whole picture from a simple story summary or what have you. And the gameplay in Haruka is pretty unique, on top of that. So let’s see if I can shed some light on it here.

You play as Takamaru, the descendant of a long line of ninja clan leaders called the Dragonians who have the power to imbue the girls they fuck with an energy intuitively called Sex Power, or SP as it’s generally shortened to. The premise is set up as a sentai parody, where an evil organization (the Noroi Faction) sends out increasingly powerful foes as time progresses, and you have to keep having sex with your three different-colored transforming ninja heroines to give them SP and keep them competitive, as well as command them in combat. It’s difficult to define as any particular genre, so I’ll call it a Transforming Ninja Heroine Raising Sim. 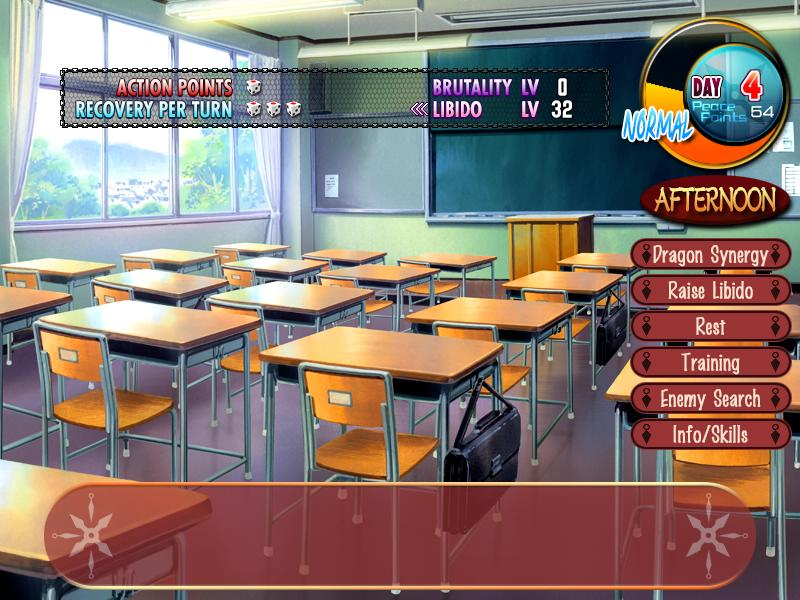 The game’s divided into days, wherein each day has a Morning/Afternoon/Night phase. Afternoon is pictured above, though Morning is identical except that some of the sex options are only available in one or the other. You lose if you go over 99 days, but this is fairly generous and you can take your sweet time. It’s also only one of numerous game over conditions that provide different bad endings. 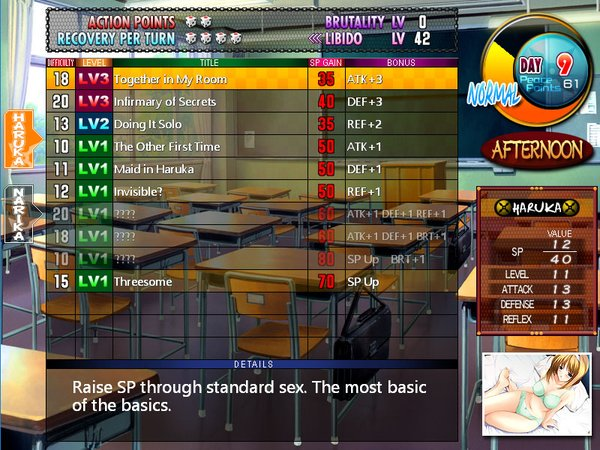 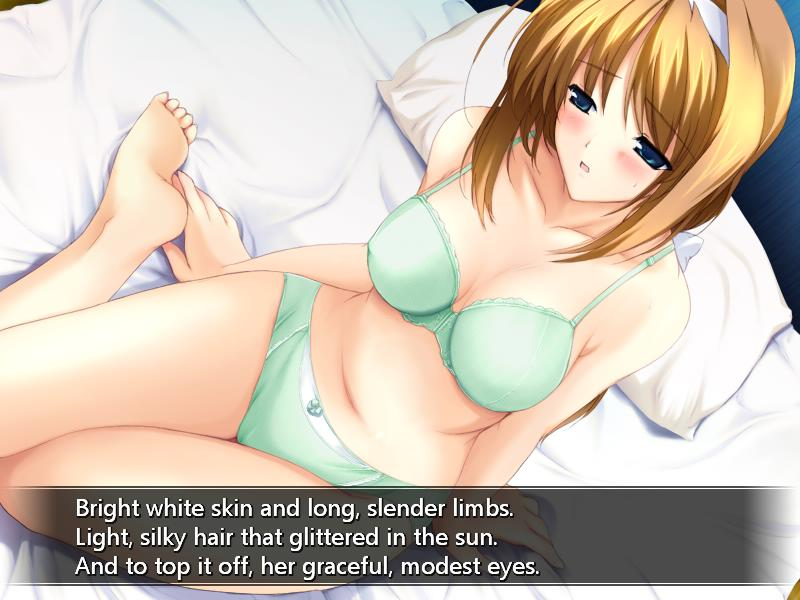 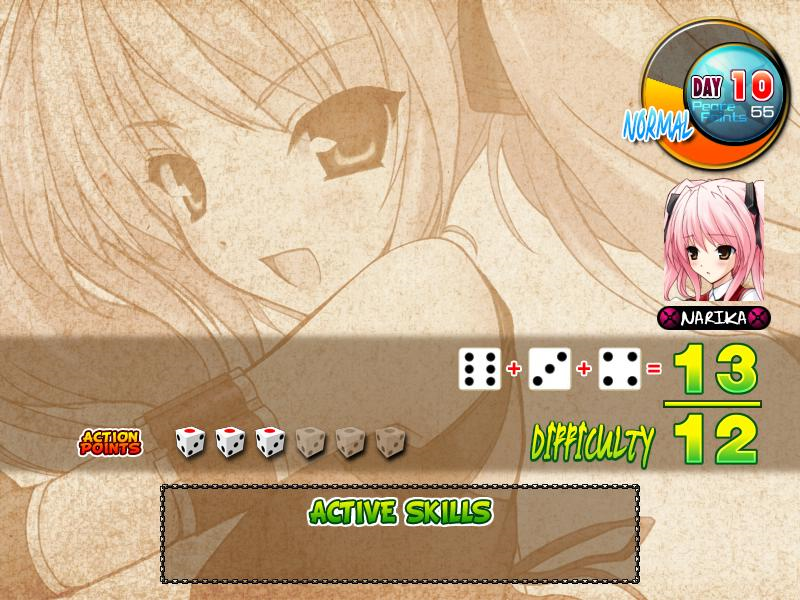 The success of Dragon Synergy, among some other options, is determined by dice rolls. Each day you recover a number of dice based on how high your Libido level is, and if you’re able to roll a number equal to or higher than the difficulty of a Dragon Synergy option, you get the scene and the stat increases. Otherwise, you just recover a bit of SP, but the difficulty is reduced by the amount you rolled for next time you try. The other options in the Morning/Afternoon phases are Training, which only raises the Barrier (essentially HP) stat through the same dice roll system, Rest, which gives you a couple more dice immediately, Raise Libido, which increases your Libido level by playing other quality Alicesoft eroge, Enemy Search, for getting enemies to show themselves at night, and Info/Skills, to check the heroines’ stats and teach them abilities. 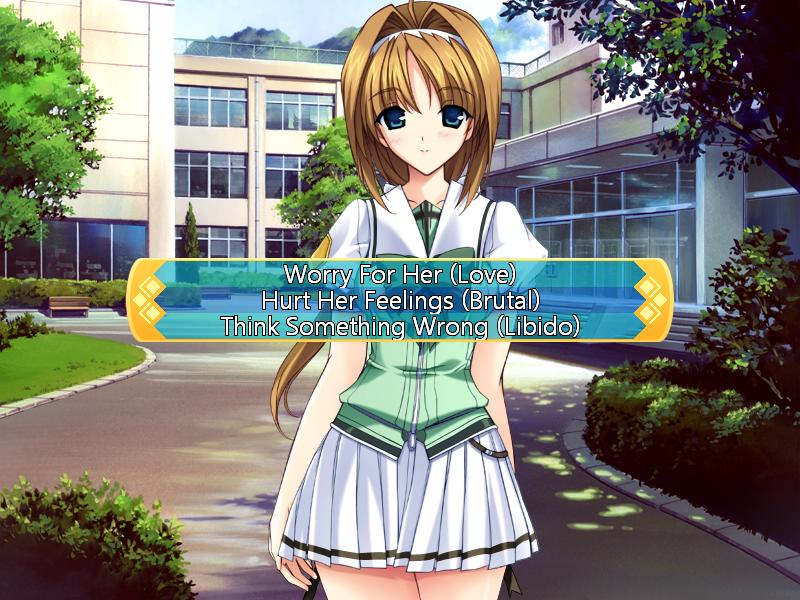 There are also more visual novelly parts between these phases where you hang out with the girls and frequently have options like this that offer various effects. Will you be a caring friend? Will you be a dick for no reason? Will you be a skeevy weirdo? The choice is YOURS. These can have direct effects on gameplay as well as affecting route splits down the road. 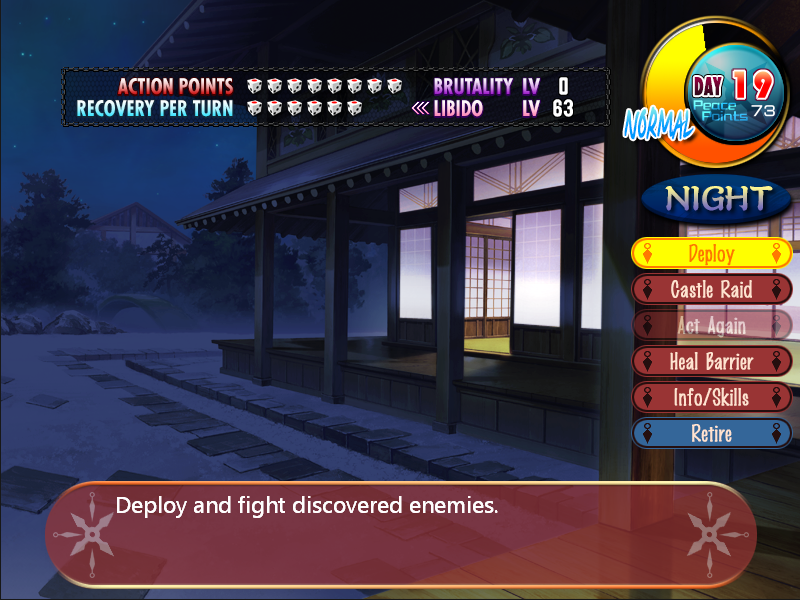 The Night phase is when you’ve got action happening. Every day, more enemies appear in the city, and the more enemies there are, the more that peace point gauge in the top right depletes. If that runs out, it’s game over, so you have to regularly deploy and fight enemies to regain peace points and keep it up. 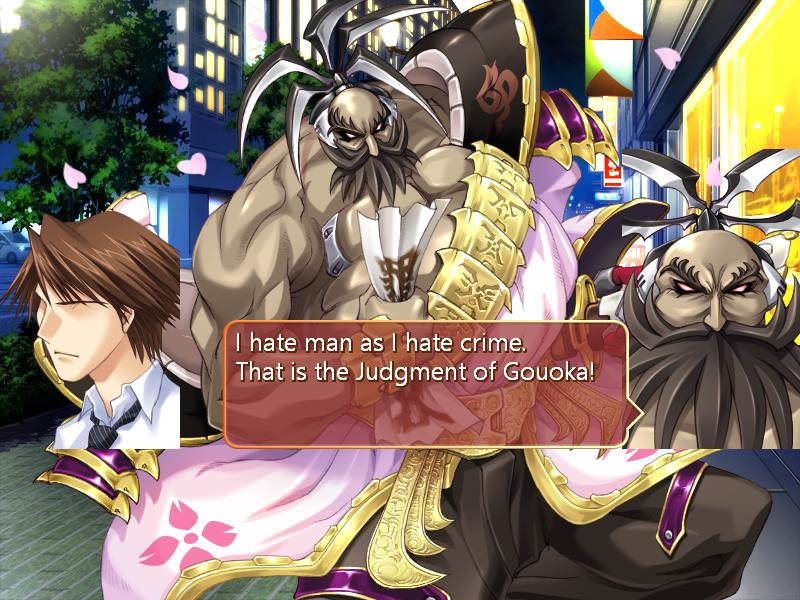 There’s generic ninja henchmen, but what’s more of interest is the Kainin (a combination of KAIjin, which you might be familiar with if you’re into tokusatsu, and NINja), which are all unique boss enemies that get a scene where they’re terrorizing random people before your ninjas interrupt and the fight starts. These tend to be the most colorful characters in the game that all have ridiculous designs and gimmicks. Gouoka, the first Kainin, pictured above, is obsessed with giving people extreme punishments for petty crimes. 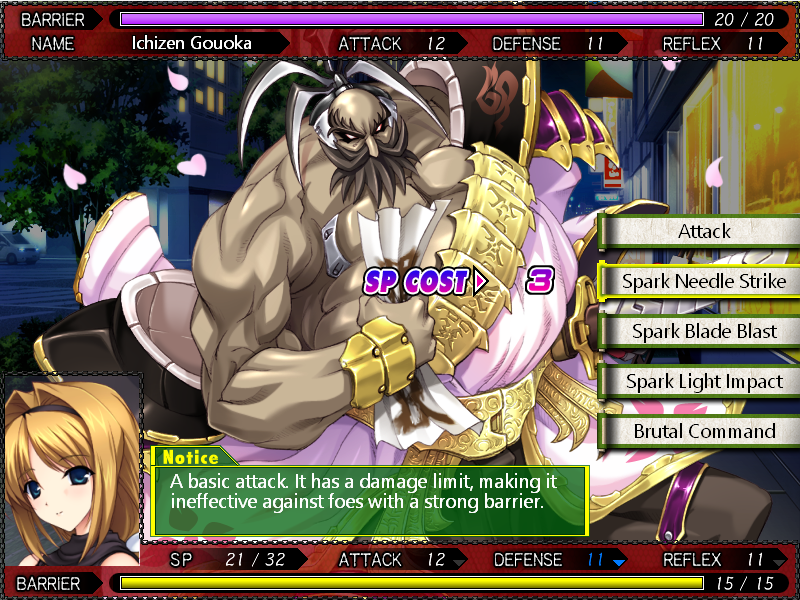 Fights are fairly straightforward. You have a nearly useless but zero cost attack, a weak attack, a strong attack, and an attack with a special effect that’s different for each heroine. Most of the time, a fight will be decided by how thoroughly you’ve prepared beforehand. The final option there, “Brutal Command”, is for if you want to instantly lose. 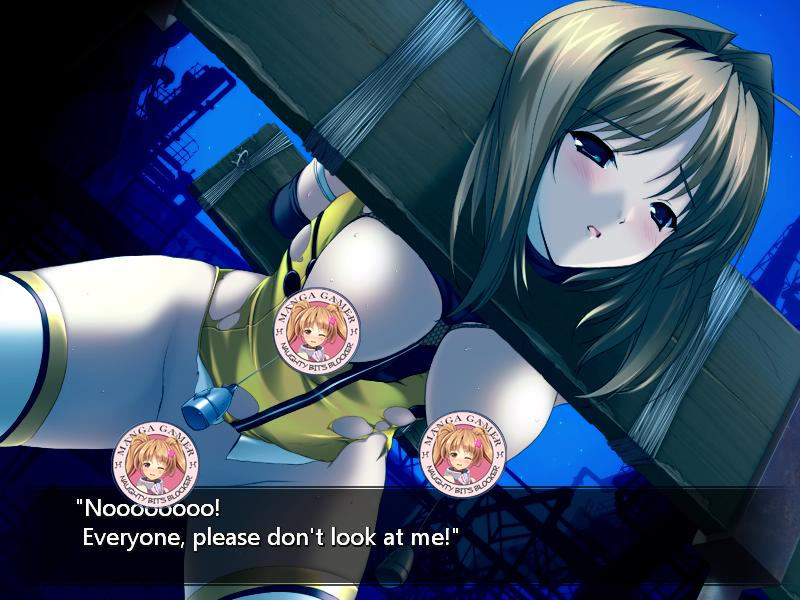 And when you lose to a Kainin, you get an H-scene involving that Kainin. This’d be the darker side of the porn in Haruka, involving things like bondage, tentacles, futanari, mind control, etc. Losing to a Kainin a second time with the same character also gives you a new, more extreme H-scene. In Gouoka’s scenes with Haruka, he puts her in a pillory, gathers up a group of men and forces them to rape her. The later ones tend to get increasingly hardcore, though also note that this game asks you whether you’d like to skip a rape scene beforehand, so you never have to see them if you’d prefer not to. Losing to a Kainin won’t result in a game over and actually results in stat increases just as Dragon Synergy does, but if it happens too many times, it may result in problems down the road. As a side note, between everything, the game totals out to 170-ish H-scenes, so they’re not fucking around here. 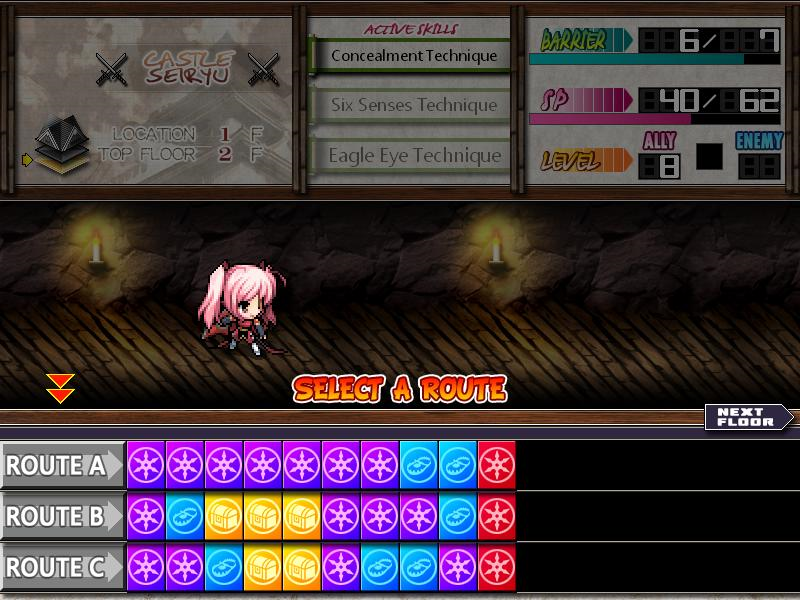 Aside from the enemies that appear in town, when an enemy castle’s appeared, you need to raid it and beat the major boss at the top to progress the game. With these, you pick one of those routes you see at the bottom and your ninja runs through a series of enemies, traps, and treasures automatically. Your character kills the enemies and takes damage by herself running through the route, but you have a regular fight with the one at the end. It’s primarily a test of whether you’re strong enough to proceed, but the sprite animations are cool.
And that’s pretty much how Beat Blades Haruka works. Didn’t really get into the story or characters here, but maybe I’ll write something about that for another blog post?? Anyway, hope people are excited for Haruka.