An Introduction to Please Bang My Wife –– Part Two!

Gather ’round, everybody! It’s time for another tale of sex, lies, and visual novels! Once again, I’m translator Pastel Chum, I’m here to spill the beans on Please Bang My Wife‘s deepest, darkest secret!

If you read my first entry, you might remember that bit at the end where I admitted to lying about something… and if not, what are you reading this for? What good is a confession if you don’t understand the fundamental conflict? I’m about to resolve the heck out of a cliffhanger—don’t you know how drama is supposed to work!? Go ahead, read the first part! There’s still time! I’ll wait. I’ll just be right… here.

Seriously, I’m really banking on this premise here. Just read the the first blog, for me, okay? Please?

We good? All caught up yet?

As I was saying, there was a certain crucial fact that I outright fibbed about in my last entry. Remember when I said that the most interesting part of the game was that Mariko narrated her encounters to her husband, without us ever seeing them first-hand? Well! That’s… still technically true, in a manner of speaking? The main plot follows Yasushi, who’s away at work while his wife is getting busy with her paramour; obviously, he’s not around to watch it happen. But, did you know that this tri-force of love… has a second quest? 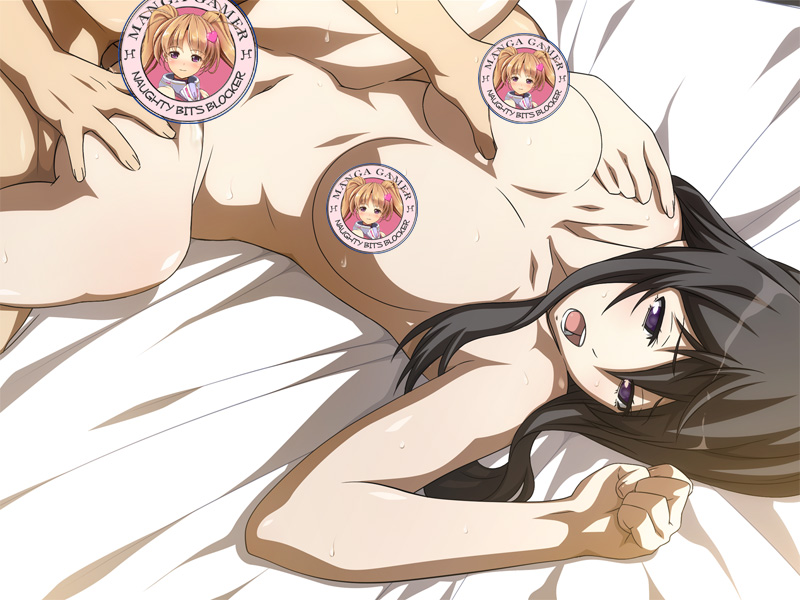 That’s right, Please Bang My Wife is actually split up into two distinct halves! Once you’ve seen Yasushi’s story to its conclusion, you can then watch each and every one of Mariko’s sordid encounters from her own point of view! During the main story, it’s apparent that Mariko’s confession isn’t exactly forthright—her accounts are rife with contradictions and little white lies. It seems that even when we’re baring our souls, there are still some details we’d prefer to keep hidden, at least until we’re called out on them. Yet, some of these little secrets manage to sneak under the rug, where they remain the unique property of those who were there in the moment… until now!

From Mariko’s perspective, you can see exactly what occurred, in vivid, un-blurry detail (SPOILERS: it’s a whole big thing of sex). Try to spot the discrepancies for yourself; some of them are relatively minor, but the others… not so much! You’ll also get a peek inside her thoughts, where you’ll discover what was really going through her head during those tender moments. What was it that first led her astray? How did she get trapped within this tempest of temptation? Was she truly trying to remain faithful to her husband, or was it all just a clever ruse?

Please Bang My Wife is a down-to-earth story about three real (fictional) people in the real world—there’s no fantasy backdrop, or improbable harem scenario. All three characters have their own goals and motivations, and this game understands that; it lets us see how all of them interact and overlap. Mistakes are made, and there are consequences. There’s definitely some moral ambiguity involved, and I don’t think it would’ve worked if we weren’t provided both sides of the story. That, to me, is what makes the characters here feel so alive, and human. It’s an unfortunate set of circumstances that you believe could happen… though, hopefully not to any of you!

(See? I wasn’t lying about it being the most interesting part of the game.)

Don’t believe Mariko’s lies! Uncover the truth for yourself on September 30th! I’ll be back with some overall thoughts in a third and final blog post, so see you then!