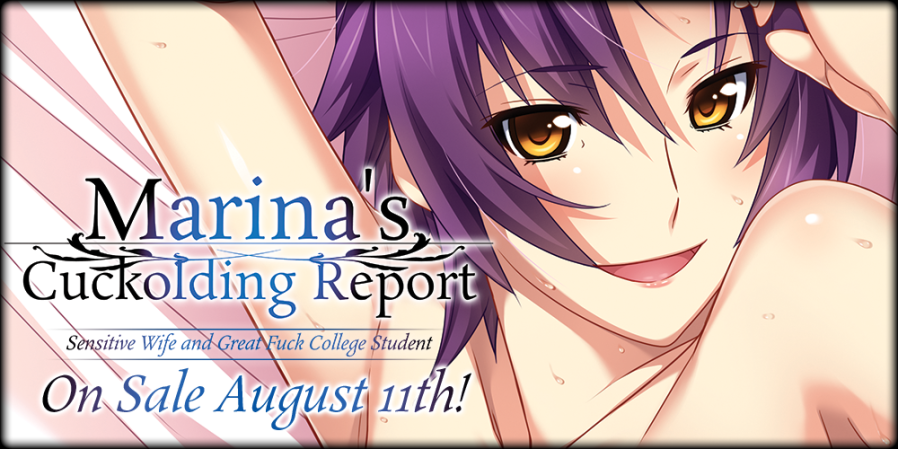 Hey everyone! This is shaku-tan, the editor for Marina’s Cuckolding Report: Sensitive Wife and Great Fuck College Student. It’s a game that’s not quite the same as your average NTR: instead of being stolen away, the main character’s wife, Marina, goes and sleeps with another man at the husband’s request, then comes home and tells him all about it. It may seem like a small difference, but it makes for a fun twist! And today, I wanted to tell you a little bit about the characters in the game and why each one of them makes the game so appealing!

Kenji is your average guy. He’s in his 30s and works at an office (of a generally non-descript nature). He’s married to Marina and the two have a daughter, Saki.

Kenji seems bland at first, and he definitely comes across as submissive and apologetic. Instead of immediately demanding that Marina sleep with another man when he finds out that the idea really turns him on, he’s worried about how other people would react and how it could affect his relationships. Because a lot of eroge/nukige have sexual scenarios with little realism behind them (not that there’s anything wrong with that; they’re nukige, after all!), I really found Kenji to be a breath of fresh air and enjoyed watching him explore how he felt about his fetish. He’s also ever only slept with Marina, which makes him feel even more inexperienced and innocent.

You might be into Kenji if you’re more of a voyeur or like hearing juicy stories secondhand!

Marina has been married to Kenji for quite some time. She’s a bit of a tomboy and isn’t afraid to say what’s on her mind. It’s clear that she runs the show around the Azuma household, and everyone seems a-okay with that! Marina works part-time at a local supermarket when she’s not at home taking care of Saki.

Marina is also depicted very realistically in the game: when she finds out what’s been bothering Kenji and what he wants her to do, she’s both relieved (that his mind hasn’t been preoccupied with another lover) and disturbed (why on earth would she sleep with someone other than Kenji?). She’s not afraid to tell him how she feels about it, even after she’s agreed to do what Kenji asks.

Marina’s got curves, she’s got curves, boy, does she have curves! Did I mention that Marina has curves? It’s something that I definitely enjoyed: while she does have a VERY hourglass-shaped figure, the art doesn’t depict her as being rail-thin or with a face a teenager would envy. Looking at her, you can tell she’s a mother and maturing with grace, and I think anyone that’s a fan of MILFs will be smitten. 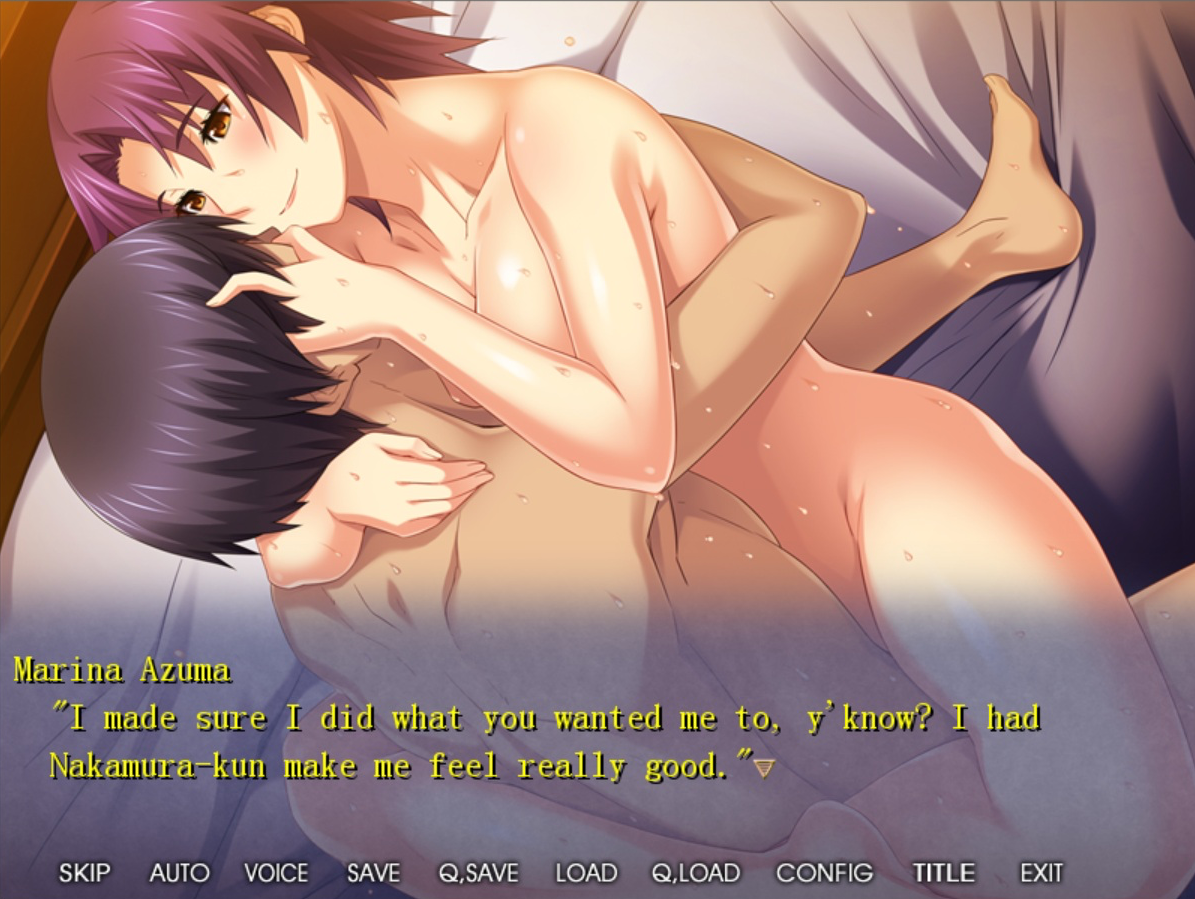 Oooooh, Hiroto. Hiroto is a college student who also works at the supermarket part-time. Polite around his elders and apparently quite a cougar-magnet, Hiroto actually flusters quite easily and has a deeeeeeeeeep, dark secret! What could it be? His youth and innocence are charming, especially when he “faces off” against Marina in the bedroom. Can you keep score? Because Marina and Hiroto keep losing track!

Hiroto adds a nice twist to the Azuma household situation. Sleeping with Marina might be one thing, but how will Kenji handle it when Hiroto comes over for dinner and plays with his daughter?

You might end up liking Hiroto best if you’re into younger, really fit, easily embarrassed guys!

I was going to tell you about why she’s the best, but I’m just going to leave this picture here and tell you that if you need any reason to play Marina’s Cuckolding Report: Sensitive Wife and Good Fuck College Student, that reason it right here.

Play it for the adorable little girl. Do it for Saki. 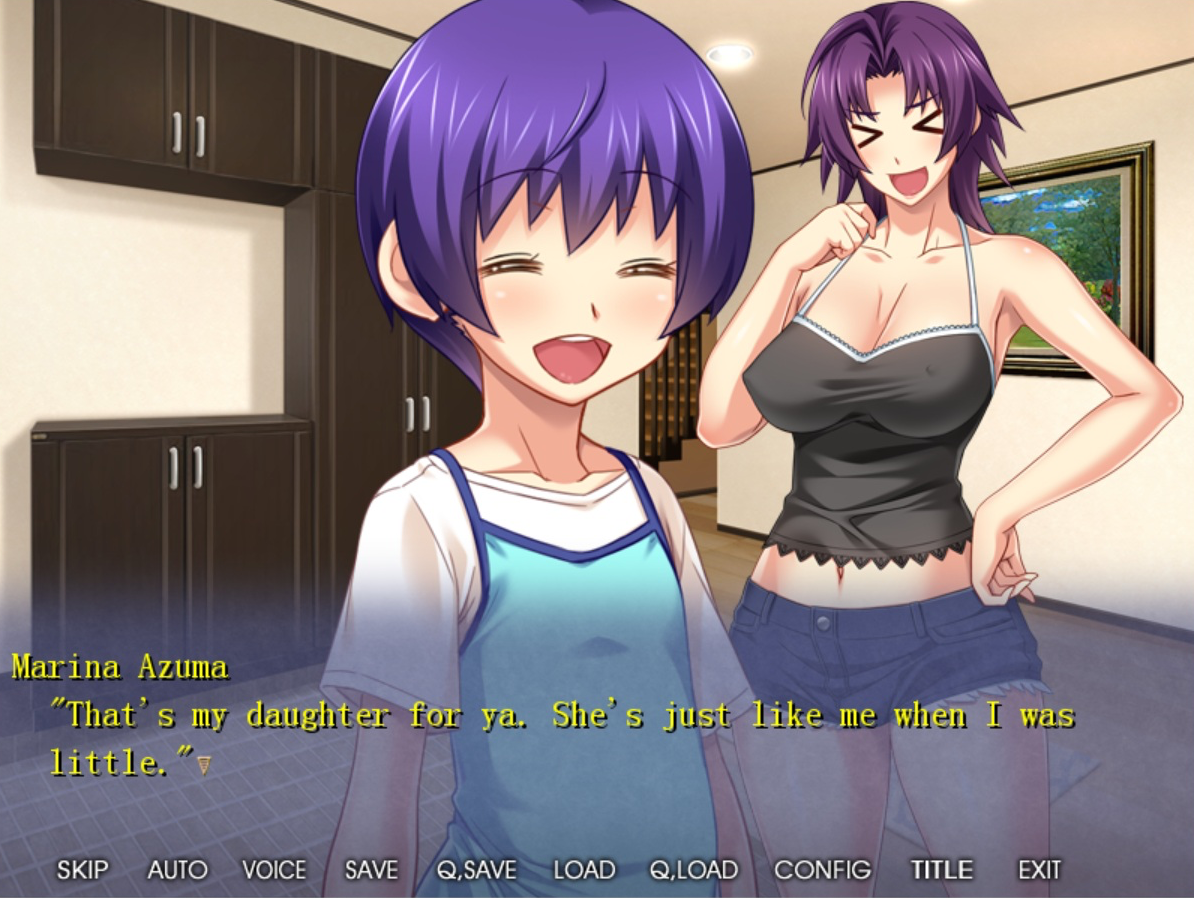