12 Days of Visual Novels: A Kiss For The Petals 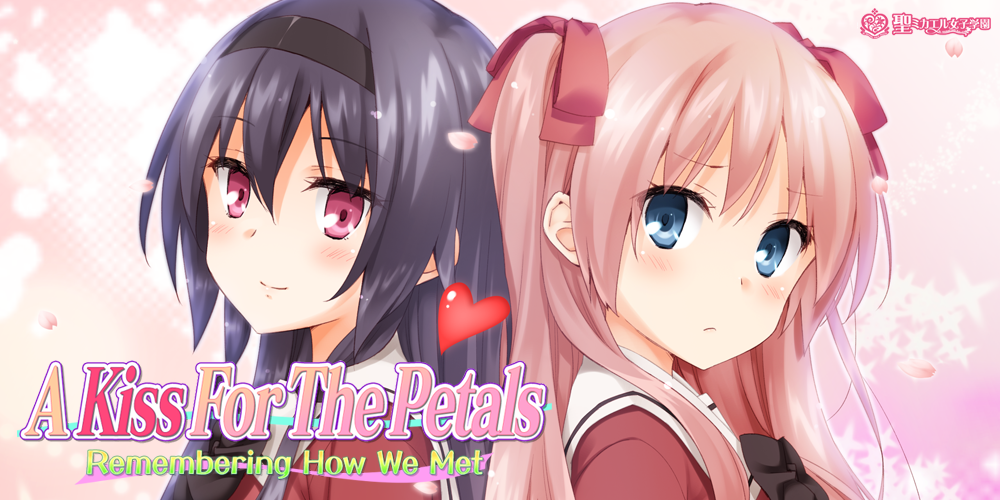 Greetings. This is Craig Donson, the supervisor and editor for the English localization of A Kiss For The Petals – Remembering How We Met.

A Kiss For The Petals is a yuri visual novel series that launched in 2006, in a time when adult-oriented yuri products were scarce. As its title suggests, its sexual themes has been its primary attraction from the start, distinguished further with its dedication to “pure” love by avoiding such elements as male characters, toys, gender transformations, emotionally heavy storylines, and anything that could be considered “hardcore.” Recent titles have put an equal emphasis on character development and storytelling.

Originally released for mobile phones in Japan, Remembering How We Met eschews sex scenes entirely as it recounts the start of the relationship between classmates Azumi Risa and Ayase Miya. Risa, the hardworking class representative, finds herself in constant conflict with the natural prodigy Miya, whose great intellect begets a severe unwillingness to attend classes. Risa’s unceasing physical pursuits of Miya become romantic as they come to realize their deep concern for one another.

I have followed the series’ growth as a fan since 2008, and as I watched—and helped—it grow since then, it turned from an enticing novelty to something truly expansive yet one of a kind. It was truly an honor to have the responsibility of grooming a Japanese mobile app into a fully localized product for Windows, Mac OS X, and Linux users across the world. Our thoughts and experiences working on it, as well as those of the series producer, are documented on this blog, so I recommend reading those posts as well after enjoying the visual novel.

A Kiss For The Petals is a highly prolific series in Japan, with several dozen titles released across multiple media and more currently in production. The story of Risa and Miya is one of many within the franchise, and Remembering How We Met in particular is designed to introduce new fans in as gentle a manner as possible. As this landmark first English release of the series gathers support, the odds for more titles to follow increase. We believe yuri will save the world — will you be there when it does?

What did you think about Remembering How We Met? Let us know in the comments or using the hashtag #12daysofVNs! Check back tomorrow for our next installment of the 12 Days of Visual Novels! (And don’t forget about our winter sale either!)

Pick up Remembering How We Met or any of our other major 2015 releases and earn triple MangaGamer points! 1 MG point = $0.01 that you can use to apply to future purchases (you can even pay for entire games in points!).

Tagged  12 days of vns, a kiss for the petals, sonohana, st michaels.
Bookmark the permalink.