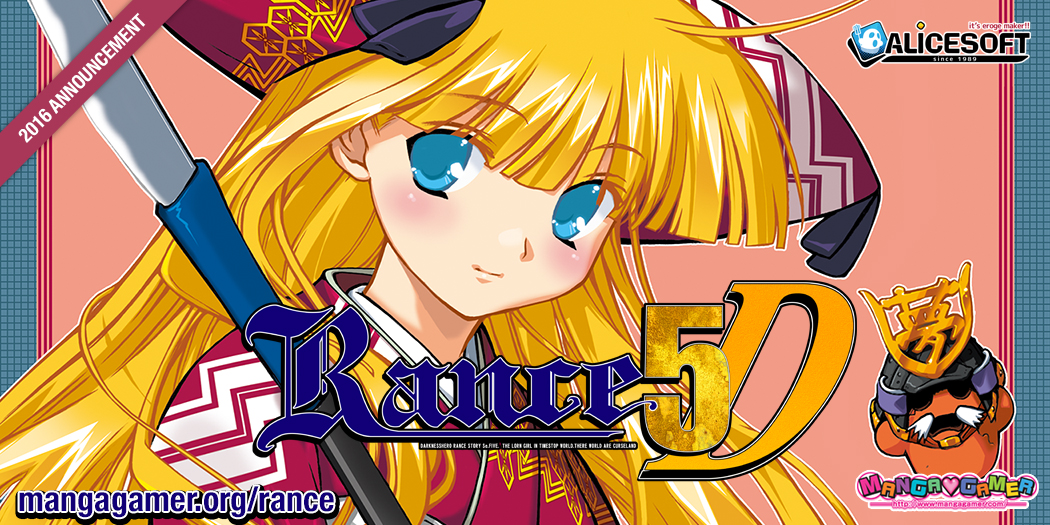 Hello! Last time on our Rance 5D series, we went over some of the basic gameplay and the time before that, we introduced the game and the series. Today, I want to give you a look at how combat works and tell you some tips and tricks for improving your odds. 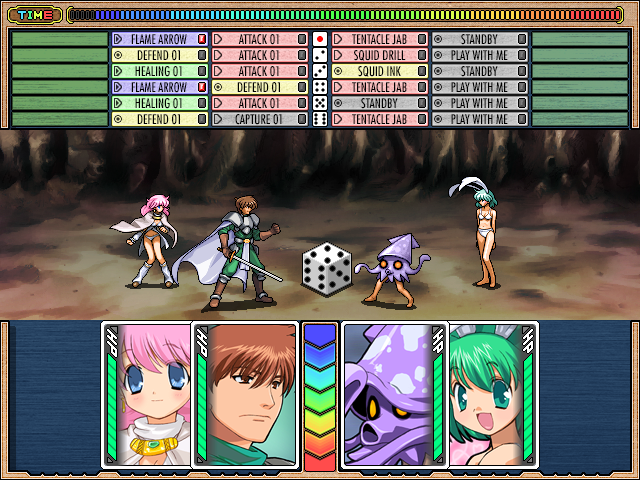 In this game, there’s nothing the player can do in battle. You just watch. When the battle starts, a die is automatically rolled to decide which battle actions are taken. For instance, if the die rolls 4, both your enemies and allies will take the battle action in slot 4.

Actions take place in the order of non-combat actions >> support magic >> weapon attacks >> magic attacks.
The symbol to the left of the battle actions is their range.
(Triangle) targets the first character.
(Black Triangle) targets one random character.
(Square) targets everyone.
(Circle) usually targets self.

Once a battle starts, cheer on your party. However, it’s not as if there’s nothing you can do about battles. Before battles, you can change the arrangement of characters’ skills and their places in your battle party to prepare for battle and raise your chances of winning. After a battle, every member of your party (even those who didn’t battle) receive experience. Battles also take up time. In between the enemy and ally face CGs is a mini timer. If it all runs out, you’ll lose one unit of time (though it’s normal to lose a unit of time in battle).

The Trick to Combat

Your opponents aren’t randomized, but appear in a specific order. If you think you can’t win, running is always an option (unless you’re fighting a boss). You can also try moving defensive skills to the same slot as powerful enemy attacks. Die bugs will increase the probability of landing on a particular number, so you can also place strong attacks in that slot. 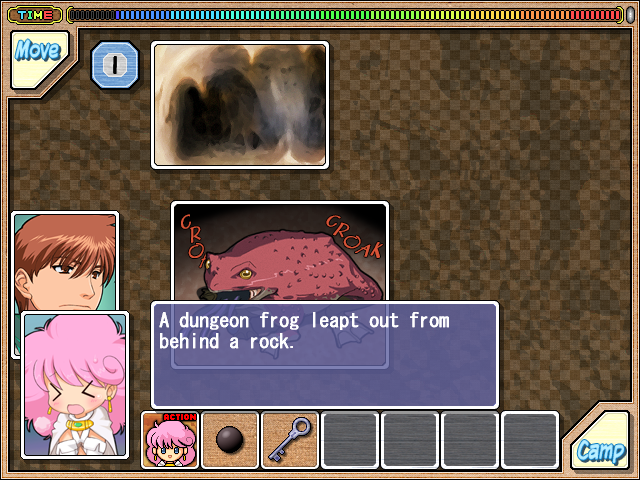 Not sure what to do with those Normal Events (blue orbs)? Here’s a rundown on which characters can do what during these events (though be careful, because if you use the same action over and over again, you’ll trigger a trap):

Background (Check)
Will find capture ropes, Ibeprofun, and time bags.
Background (Punch)
Will find the necessary precautionary items for traps in this chapter.

If you have a gal monster in your battle party, you can train her to make her stronger. This is the only way to make them stronger, since they don’t level up.

Each other character that you can have in your party can do different things as well, but please try things out with them on your own. 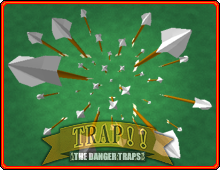 Uh oh! Landed on a trap? There are a few different kinds of traps in the game and each type has a different effect, but triggering traps is always a bad thing. Generally they can be divided into three types:

Characters can try to disarm traps, but using anti-trap items is an easy way to bypass them. Incidentally, the evasive daruma is effective against the flying arrow trap above.

And while we’re talking items, why don’t we go through some of the ones you’ll see in the game and explain what they do:

Happy Sheep
A reliable sheep who participates in battle with you. With one of these, you’ll get more experience from battle! That’s something to be happy about, right?

Horned Owl
A scary thing who participates in battle with you. This thing increases the damage you do to enemies.

Personal Nurse
She participates in battle with you. She flies around everyone in her UFO, recovering a little of their HP.

One-eyed Bug
A weird thing that can influence the roll of the die. With this thing, it’ll roll 1s more. It has two-eyed and three-eyed and… a few other siblings.

Antlion
It hides in the sand and eats ants. A man’s treasure.

Chest Key
An all-purpose key that can open any treasure chest. But they’ll break when you use them, so they’re disposable.

Ibeprofun
Health-recovering medicine made by Happiness Pharmaceuticals. Resting in camp will take time, but these won’t. Use them if your characters are getting a little weakened.

EXP Orb
Experience is a valuable thing that can’t be taught by others, but must be gained through one’s own actions, but you can also get it pretty easily just by swallowing one of these.

Rance’s Libido
It gets built up when Rance levels. It can be emitted if used on a girl, and will be automatically consumed during sex scenes. Girls get powered up for some reason when Rance has sex with them. Please think through who you’d like to pump up with your limited libido.

Equipment
Each character has their own exclusive equipment. They’re stronger with stuff like +1 on them. If they break in battle, they’ll be 1/3 as effective, so repair them right away.
Hint: +X equipment will appear depending on how many of that equipment you’re carrying.

Time Bag
A mysterious bag that can extend your time limits. If used on a character in the camp screen, your time will increase.

Bouquet
If you’re looking to grab a girl’s heart, try this! Just give ’em this and you’ll be a-okay! Especially effective on girls who probably don’t receive too many of these.

Junk
A boy’s toy. Once picked up, it cannot be discarded. Be careful not to pick up so much junk that you don’t have room for other items.

With this, you should be armed pretty well for Rance 5D’s release! Though if you’re still a little worried about how to play a game as weird as this, there’s one last page in the manual with advice that’s a bit more concrete that Alicesoft advises skipping if you want to go in blind. We’ll give you the info on that page after the trivia this time, in case you want to skip it.

Rance Juicy Info #10:
That Suspicious Startup Screen: The screen that shows up when this game starts is a joke based on old computers. Most people probably don’t get that sort of thing nowadays, though… It’s not actually running in BASIC.

Rance Juicy Info #12:
Souls: All souls in this world are a part of the Creator God Rudrathaum. If a living creature dies, its soul returns to Rudrathaum’s body. Devils interfere with that circle of life and steal souls before they return. Gathering souls is a devil’s work.

Time Tips
As you play, your remaining time on the top of the screen will steadily run out. You’re going at a good pace if the green orbs on the roulette (your remaining events) have the number 3 on them when your time is half up. If they say 1 or 2, you’ve got time to make some stops on your way (looking for monsters with Slow Spin or etc). If they’re at 5, you might want to hurry a little (shoot for events using Slow Spin, maybe). From chapter 2 on, you’ll spend some time in town before heading into the dungeons, so if you take too much time there, the dungeon segments could get tricky. If you have less than 2/3 of your time left by the time you enter the dungeon, it would be safe to start the chapter over.

Level Tips
There’s always random chance at play, so you could win at relatively low levels, or lose at relatively high ones. It’s a bit tough to figure out exactly how much you should be leveling.
From our estimations during development…

…is a good ballpark. If you’re higher leveled than this, things should be easy for you. You can also raise Rance’s mage level, but it’s really just something of an extra option. There’s no need to make his skill levels even (and if he doesn’t have Rance Attack at the end of chapter 3, you’ll lose, so…). His warrior level is what you should focus on. Level Sill’s skills according to your own preferences.

Roulette Balance
If you’re only using Normal Spin, you’re leaving everything to RNG. If you’d like to try for certain outcomes, you should use “Slow Spin” or “Cautious Spin.” If you’re low on items, keep in mind that instead of treasure chests, you can use characters’ exclusive actions (explained above) in Normal Events for some. Warning: Using “Normal Spin” will get you closer to your destination, i.e. the green orbs will increase in number. If you’re aiming for green orbs with slower spins, the number of orbs won’t increase, so you’ll have to use “Normal Spin” to increase their number before aiming for them.

If You Absolutely Cannot Win in Battle
In some cases, you won’t be able to win with just luck. If it seems like you’re close to winning, try again a second or third time. Change battle actions or rest to recover stamina in camp or etc… However, if you can’t win no matter how many times you try, you may just not have enough levels, or not have strong enough equipment. At times like that, it might be good to restart from a little earlier in the game (choose “Scene Select” on the main menu).